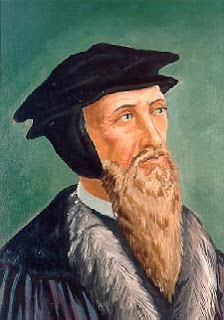 Tomorrow (Friday, July 10th) will mark the 500th anniversary of the birth of John Calvin. Calvin was born in Noyon, Picardy, France in 1509. He initially studied for the Catholic priesthood, but later went to the University of Orleans to study law. It was at Orleans that Calvin first encountered evangelical teaching as the ripples of the Protestant Reformation reached France. Calvin was converted sometimes around 1533 and was thereafter completely devoted to gospel ministry. His motto: "My heart I give Thee, Lord, eagerly and earnestly."
Calvin fled persecution for Basel, Switzerland in 1535. He desired to live a quiet life as a scholar "in some obscure corner," but he was called in 1536 to become a pastor in Geneva. His work for reformation there was initially frustrated, and he was expelled from the city in 1538. For the next three years (1538-1541) he led a Protestant refugee congregation in Strasbourg, France. While in Strasbourg, he met and married a young widow named Idelette de Bure. The one child given to them in 1542 lived only 22 days after his birth. In 1541 the city council of Geneva invited Calvin to return to Geneva. Despite initial reluctance, he finally agreed to return and spent the last years of his life vigorously involved in ministry in that city.
In Geneva Calvin maintained an intense preaching and writing schedule promoting the spread of the Reformation gospel. In 1558 he founded the Geneva Academy, which trained scores of Reformed pastors and missionaries. In 1559 he completed the definitive edition of his magnum opus, The Institutes of the Christian Religion. He wrote commentaries on 24 of the 39 Old Testament books and 24 of the 27 New Testament books (all except 2 and 3 John and Revelation). Protestant refugees from across Europe came to Geneva to study and learn, and many then took the gospel back to their homelands.
Calvin died in 1564 at the age of 55, leaving instructions that he be buried in obscurity without a tombstone. Calvin was the father of the Presbyterian and Reformed church movement. Though Baptists differ with Calvin in some important points of doctrine (namely in the areas of baptism and church government), there is much with which we can find agreement. Calvin stressed the ultimate authority of scripture, the sovereignty of God, and salvation by grace alone through faith alone. We can remember his legacy with thanksgiving this week.
JTR
Posted by Jeffrey T. Riddle at 5:18 PM