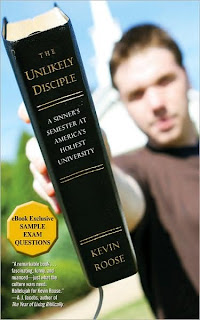 I ran across an announcement for the book Unlikely Disciple by Kevin Roose (Grand Central Publishing, 2009), a Brown University student who spent a semester undercover at Liberty University. You can read the Barnes and Noble synopsis here.

Couple of observations:
First: If he wanted to go to a conservative school, it would have made more sense to go someplace like Bob Jones rather than Liberty.
Second: I wonder if he realizes that at one point Brown University was essentially the equivalent of Liberty University, a Baptist school with strict standards for moral behavior.
Third, the notice stuck because I just finished reading Francis Wayland's Notes on the Principles and Practices of Baptist Churches (1857). Wayland (1796-1865), an evangelical Baptist Pastor, served as President at Brown from 1827-55. You can look for some Wayland quotes in upcoming posts.
JTR