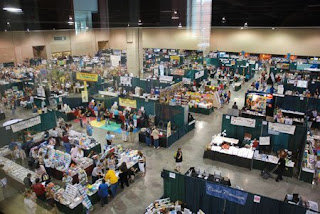 Photo: The exhibit hall in the Richmond Convention Center at HEAV.
Llewellyn and I attended the HEAV conference June 11-13 at the Richmond Convention Center. I think we have found the best way for us to attend the conference. First, Llewellyn’s parents come up and keep the children. This is a good time for us to be alone, to discuss school and other issues, and choose curriculum. Second, we stay in a hotel in Short Pump and drive back and forth to the Convention Center (we’ve tried staying downtown and like staying on the West End much better).
Here’s a report on the Conference:
You see all sorts at a HEAV conference. There are Mennonites and Brethren, nattily dressed suburbanites, and (yes) stereotyptical large families with moms wearing denim jumpers trailed by 6 or 7 head of children. It is always encouraging as a homeschooling family just to know that so many others are doing the same thing you are. You also see the diversity of the homeschool community. There seemed, in particular, to be more African-American homeschooling families at this year’s conference which was nice to see. That might have been due to the fact that Voddie Baucham was the keynote speaker.
The Conference centers on various workshops, an exhibit hall, and a used curriculum sale.
Friday (June 12):
I attended the morning workshop led by Adam Andrews of the Center for Literacy Education on "What is a Classic, Anyway? Teaching Great Books: The Why and Wherefore." He used the book of Job as an example of classic literature but also referenced "Mike Mulligan and the Steamshovel," the Iliad, and The Lord of the Rings. A discussion also ensued on whether "Good Night, Moon" would be considered a classic.
In the afternoon I went to Mike Snavely’s talk titled "Aunt Lucy?" He offered a critique of the evolutionary "ascent of man" conception, arguing that the dating of supposed links is presumptive and that all the figures on the chart are either apes or men. He also described various finds like the "Piltdown Man" that have later been determined to be hoaxes. Snavely also noted the racist origins of evolution and the original subtitle of Darwin’s Origin of Species which featured the phrase "the preservation of favored races."
The evening keynote address was by Voddie Baucham on "Education and Worldview: How Education Affects Worldview and What That Means for Your Child." Using Luke 6:40, Baucham argued that education is inseparable from discipleship. He noted that less than 10% of professing Christians and only 50% of pastors have a Biblical worldview. He lamented that some people say we could change our society if all the professing Christians would just stand us, but he said if they did this the problem is that they would all be facing in different directions.
As a parent he wants to teach his children to read, write, and reason.
He noted that if a child goes to a "government" school K-12, he will spend 14,000 hours in class. How can that be counterbalanced by 1 hour per week in Sunday School? For the church to match at that rate would take 140 years!
He offered this quip: "If you send your child to Caesar, don’t be surprised if he comes back a Roman."
He contrasted the secular humanism view with the Christian theism view on God (atheism vs. theism); Man (evolution vs. creation); truth (relative vs. objective); knowledge (natural materialism vs. reason/revelation); and ethics (negotatited/cultural vs. objective/universal).
He noted that whereas 70-88% of children in typical youth groups end up leaving the faith, 94% of children who are homeschooled retain the faith of their parents.
JTR
Posted by Jeffrey T. Riddle at 10:08 AM

I wish we could have gone. Debbie and I were looking forward to it, but with her leg injury, it was impossible. Thanks for the blog updates!