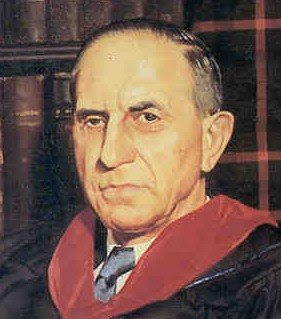 Note: This article below is adapted from the conclusion to last Sunday’s morning sermon from Romans 2:12-16.
In the day when God shall judge the secrets of men by Jesus Christ according to my gospel (Romans 2:16).
I recently read Ian Murray’s biography of Professor John Murray (The Life of John Murray [Banner of Truth, 2007). John Murray lived from 1898 to 1975. He was born in Scotland but spent the bulk of his adult life in the United States, teaching first at Princeton Seminary and then for decades at Westminster Seminary outside Philadelphia. I have been reading his classic commentary on Romans in preparation for this sermon series.
Murray was known for his gravity, his seriousness, and his piety. Many consider him a modern day Puritan. He was particularly known for the seriousness with which he kept the Sabbath.
In the biography, a former student describes a time when he and Dr. Murray were guests in the home of the Freeman family. The conversation turned to the subject of human sinfulness, and Dr. Murray began vigorously to hold forth the doctrine of total depravity. The hostess protested: "But Mr. Murray, we know that you are not as bad as that." Though probably meant as a compliment, Murray did not smile. Instead, he fixed his gaze on her and replied in his sternest tone: "Mrs. Freeman, if you knew what a cesspool of iniquity this vile heart of mine is, you would never say such a thing!" (p. 99).
Truly, it is the most godly men who understand to the greatest degree their absolute and utter need for Christ. The more we understand about ourselves, the less we think about ourselves, and the more we admire Christ.
Grace and peace, Pastor Jeff Riddle
Note: Evangel article June 16, 2009
Posted by Jeffrey T. Riddle at 10:46 AM