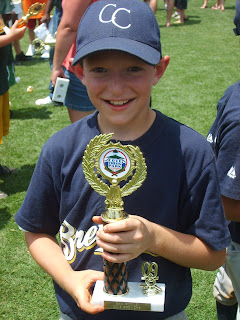 Friday evening we were back at Cove Creek Park where Sam pitched three of six innings in a playoff game (combining with a team-mate for a one hitter in a 3-0 victory) that put his team (the Brewers) into the Saturday Minor League Championship game. Then, Saturday morning his team beat the Reds to take the tournament title. Sam pitched another inning, played second base, and hit second in the order with an RBI single and a run scored in the win. 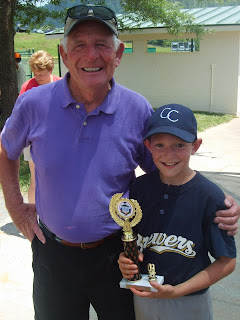 Sam and Llew's Dad (from whom Sam gets his middle name "George") pose after the closing ceremonies at Cove Creek.