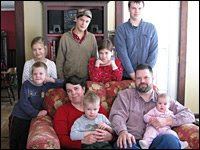 Photo: The Swanson family of Shelby, Michigan featured in the NPR report.
Yesterday's "Morning Edition" program on NPR featured a report on the "Quiver Full" movement among some conservative Christians (you can listen and read it here). It is certainly interesting to pick up on the wonder in the reporter's voice at folk who see large families on small salaries not as a burden but a blessing. You can also hear the alarm in this segment:
"They speak about, 'If everyone starts having eight children or 12 children, imagine in three generations what we'll be able to do,'"Joyce says. " 'We'll be able to take over both halls of Congress, we'll be able to reclaim sinful cities like San Francisco for the faithful, and we'll be able to wage very effective massive boycotts against companies that are going against God's will.' "
JTR
Posted by Jeffrey T. Riddle at 11:37 AM