Colin of the Peats 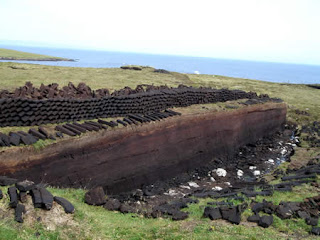 An illustration from yesterday's sermon:

I was reading an article the other day which made reference to the conversion long ago in Scotland of a man known as "Colin of the Peats." He had worked his whole life harvesting and handling "peat" a substance used in those days for fuel. In fact, he had handled the black substance for so long that his body took on the color of the peat. The writer said:

[Moreover]…up to the hundredth year of his life he continued in [spiritual] darkness and in ignorance. His mind was in the weakness of a second childhood. He attended church as many people did in those days, but it seemed that every Sabbath Day the Word of God made no impact on him. What could you expect from such a man as this, an aged man, a man now coming into the experience of the second childhood?
But one Sabbath his face was altered and his expression was different. (Would that we would know more and more of that on the Sabbath Day, rather than eyelids heavy, people’s heads sinking to their breasts in falling asleep!) The reason for it was—as he said to his minister subsequently—‘I saw a most beautiful one last Sabbath.' ‘Where did you see him?’ [The minister asked] ‘In the sermon.’ [The old man replied] ‘What was his appearance, Colin?’ [The minister probed further.] ‘Oh, he was fairer than the sons of men; I can’t tell what he was like, for he was altogether lovely.’
Oh, that Christ would so appear to us! Oh, that on the Sabbath Day as we go to the house of God it would be like no other day in our experience: that we might see the Beloved through the preaching of the preacher, that with the preaching of the preacher Christ may be conveyed to our souls!
JTR
Note: The article cited above: Rev. N. Pfeiffer, "The Believer’s Love," TBS Quarterly Record (Jan-March 2009): p. 17.
Posted by Jeffrey T. Riddle at 10:39 AM