"The Green Bible" and the problem with Bible packaging 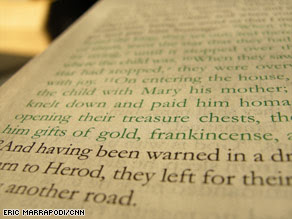 In last Sunday's message on Josiah's rediscovery of the Book of the Law in the temple (2 Kings 22-23), I noted the ubiquity of Bible translations and versions and the niche marketing of Bible "products." I quoted from this CNN article "Repackaging the Bible" about the Green Bible (with NRSV text):
Consistently the best-selling book on the planet, publishers are constantly repackaging it to lure new audiences.

Harper One in October released the Green Bible, looking at the Bible through the lens of the environment. In an effort to keep it true to its eco-conscious motif, it was printed in the United States on recycled paper with soy ink, and has a sustainable linen cover. "It is still printed on paper though," conceded publisher Mark Tauber, who said a digital format would be greenest.

Tauber said publishers were hoping to capitalize on the growing trend in Christian circles of eco-theology and creation care. The Green Bible is filled with essays from across the theological spectrum as a companion to the text.
Former Archbishop Desmond Tutu wrote the forward while Brian McLaren, a popular progressive author and pastor, and N.T. Wright, the staunch conservative theologian, contributed essays. Anytime the text mentions something about the environment, the letters are printed in green, similar to how some Bibles print the words of Jesus in red.

I also noted that the problem with those who push for so many modern Bible translations is that they think the reason people do not read and cherish the Bible is simply because it is not packaged in a format that they can understand. No, the problem is much deeper than that. As Paul said, the problem is that our sinful tendency is to suppress the truth of God. You don’t have to urge a converted man to read and cherish God’s Word. You also don’t have to convince him that its doctrines are worth believing and its ethics are worth practicing.