The Persecuted Church in India 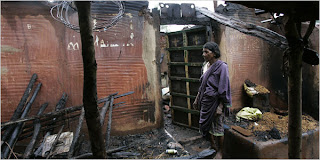 Photo: A Christian in her burned home in the Indian state of Orissa.
I began preaching yesterday on the Olivet Discourse in Mark 13 and gave some attention to Jesus' prediction of persecution his disciples would face in the gospel age:
Mark 13:9 But watch out for yourselves, for they will deliver you up to councils, and you will be beaten in the synagogues. You will be brought before rulers and kings for My sake, for a testimony to them. 10 "And the gospel must first be preached to all the nations. 11 But when they arrest you and deliver you up, do not worry beforehand, or premeditate what you will speak. But whatever is given you in that hour, speak that; for it is not you who speak, but the Holy Spirit. 12 Now brother will betray brother to death, and a father his child; and children will rise up against parents and cause them to be put to death.
I noted some of the persecution faced by believers today including recent stories about a Gospel for Asia missionary and his wife beaten by Hindu radicals (see here). Someone sent me this story today from the New York Times ("Hindu Threat to Christians: Convert of Leave") about current threats against believers in India. It begins:
BOREPANGA, India — The family of Solomon Digal was summoned by neighbors to what serves as a public square in front of the village tea shop.
They were ordered to get on their knees and bow before the portrait of a Hindu preacher. They were told to turn over their Bibles, hymnals and the two brightly colored calendar images of Christ that hung on their wall. Then, Mr. Digal, 45, a Christian since childhood, was forced to watch his Hindu neighbors set the items on fire.
“ ‘Embrace Hinduism, and your house will not be demolished,’ ” Mr. Digal recalled being told on that Wednesday afternoon in September. “ ‘Otherwise, you will be killed, or you will be thrown out of the village.’ ”
India, the world’s most populous democracy and officially a secular nation, is today haunted by a stark assault on one of its fundamental freedoms. Here in eastern Orissa State, riven by six weeks of religious clashes, Christian families like the Digals say they are being forced to abandon their faith in exchange for their safety.
The forced conversions come amid widening attacks on Christians here and in at least five other states across the country, as India prepares for national elections next spring.
Join me in praying for believers in India.
JTR
Posted by Jeffrey T. Riddle at 5:32 PM