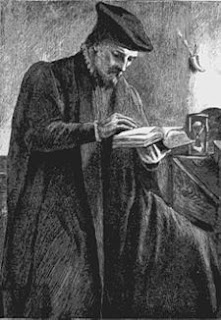 Note: This is a series of occasional verse by verse expositions of Jude. An archive of this and past commentaries may be found under the label "Jude Exposition" below.
Jude 1:11 Woe to them! For they have gone in the way of Cain, have run greedily in the error of Balaam for profit, and perished in the rebellion of Korah.
Jude announces a warning here against false teachers. That warning is: "Woe to them!" The prophets of the Old Testament often announced similar "woes." One of multiple examples would be Isaiah’s words in Isaiah 3:1: "Woe to the wicked!" Jesus also, like the prophets of old, announced such "woes" on the wicked of his day. Read Matthew 23 where Jesus seven times said, "Woe to you, scribes and Pharisees, hypocrites!" (see vv. 13, 14, 15, 23, 25, 27, 29)!
After this woe of warning, Jude makes comparison between the false professors of his day and three examples of wickedness in the Old Testament.
First, he points to the story of Cain (Genesis 4). Cain was, of course, the man who committed the first murder, unjustly striking down his brother Abel. The "ungodly men" (Jude 1:4) whom Jude opposes have followed in "the way" of Cain, rather than the way of Christ. Perhaps, as with Cain, they had failed to flee from sin which was crouching "at the door" (Genesis 4:7) with a desire to rule over them. Maybe these men had committed murder, or they had been filled with an irrational and unjust anger (the moral equivalent to murder; cf. Matthew 5:21-22).
Second, Jude notes that they ran greedily "in the error of Balaam for profit." Balaam was a pagan prophet whom the Moabites hired to curse Israel (see Numbers 22-24). When Balaam opened his mouth to curse Israel; however, the only thing he could utter were blessings. Nevertheless, Balaam stands in Scripture as a negative example of those who do spiritual things for greedy motives. Jude accuses the false teachers of peddling the things of God for material gain (cf. 1 Timothy 6:6-10).
Third, comparison is made between these men and the those who joined Korah in his rebellion against the leadership of Moses (see Numbers 16). The Lord’s response was to open up the ground under their feet and to swallow them up (see Number 16:30-33). Perhaps, like Korah these false teachers were rebelling against those in spiritual authority over them. Perhaps they were rejecting the authority of the Scriptures. They wanted to be in charge and make up their own rules.
So, we see Jude denouncing three specific kinds of wicked behavior: a murderous or hateful spirit (Cain); a greedy spirit (Balaam); and an anti-authoritarian spirit (Korah). To all these, Jude announces a "woe" of warning.
Reflections: