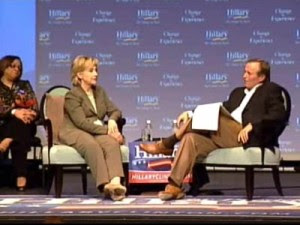 A picture is worth a thousand words. Baptist statesman (and author) John Grisham chats with Presidential candidate Hillary Clinton during a fundraising event for Clinton at the Paramount Theater in Charlottesville, Virginia on September 23, 2007.

A high ranking moderate source reports: "Grisham's visit to the New Baptist Covenenant meeting in Atlanta this week has nothing to do with his continuing support for Clinton's election but is merely an attempt to promote his new legal thriller, The Appeal, which goes on sale January 29, 2008. Everyone knows that Baptists are the primary consumers of pulp crime fiction."

p.s.: Want to supply a quote caption for the above picture?

Grisham: "Hillary, how can you and your Methodist sisters (and brothers) continue to support your paedobaptist practices in light of the overwhelming New Testament evidence in favor of believer's baptism by immersion?"
Posted by Jeffrey T. Riddle at 4:08 PM

Grisham: "Hillary, we fellow Democrats have always been under the assumption that you were liberal in your convictions. How do you then explain your comment that you were predestined for election?"

Try again Hillary. If you are going the represent the left, you need to lift your left leg over your right leg at the knee like the rest of us liberals in this room.

Grisham: "Hillary, are you more of a Whitefield Methodist or Wesley Methodist? American wants to know."

"And, John, in addition to socialized medicine and further taxation, I want to make sure every third grader knows the proper way to worship Mother Sophia."

Grisham: "Hillary, did you know that some Baptists actually believe the Bible is the word of God? How about you and the New Baptist Covenant group? You look like you could use some physical encouragement from the book of Hebrews, 'lift your drooping hands and strengthen your weak knees'. Better yet, get a spiritual lift from Jesus Himself, 'Take my yoke upon you, and learn from me, for I am gentle and lowly in heart, and you will find rest for your souls.'"