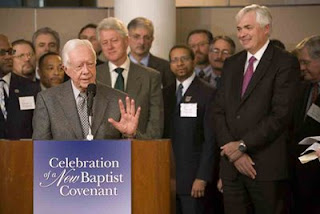 The New York Times had an article yesterday about the upcoming "New Baptist Covenant" gathering this week in Atlanta (Wednesday-Friday, January 30-February 1).

This is supposed to be a non-partisan gathering of moderate Baptists to present a more favorable picture of Baptists to the world as opposed to that put forward by the mean old, narrow-minded, poor-people-hating Southern Baptist Convention (aka the Evil Empire).
When the gathering was announced last year, Jimmy Carter and Bill Clinton were on stage, front and center (see the photo above and note Baptist General Association of Virginia's Executive Director, John Upton, just over Clinton's shoulder). Both will be keynote speakers at the gathering, and Al Gore will host a luncheon during the meeting. Moderates have long criticized the SBC for being in the back pocket of the Republican Party (and they were often not far off mark!), but they somehow fail to see the hypocrisy in their own actions, hosting such a meeting in a Presidential election year (just days before the super-Tuesday primaries no less!) and allowing former President Clinton (and husband of Hillary) to be the keynote speaker on Friday. What exactly qualifies Clinton to speak at a supposed religious gathering anyhow?
Tender to this criticism, the organizers feature token Republican Senators Chuck Grassley and Lindsey Graham on the front page of their website. But everyone knows this conference is far from being bi-partisan. How about the mere fact that this so-called Baptist gathering was called together by and most prominently features politicians and not preachers! This meeting has nothing to do with the gospel and everything to do with trying to get soft-evangelicals and other muddle-minded "Baptists" to support Hillary in November. Of course, I don't think the organizers and participants (which include the mainline African-American Baptist denominations) anticipated the challenge Obama has given her, especially among African-American voters. At least one moderate blogger (Bruce Prescott) is worried about what Clinton might say. Where are the moderate separation of church and state prophets!
By the way, another of the keynote speakers is author John Grisham from C-ville. His presence too is more than a little odd. Grisham is apparently a member of a local moderate Baptist church in C-ville, but what exactly are his qualifications as a Baptist statesman? The fact that he hosted a high profile fund-raiser for Hillary at the Paramount Theater when she visited C-ville last year is perhaps a more key clue as to why he was invited. That and the star-power. What kind of Baptist gathering is it when high-profile entertainers and politicians fills the podium and preachers the pews? I thought we were supposed to speak to the culture from God's Word rather than invite the cultural elites to dictate to us how we ought to read the Bible, practice the faith, and vote in the election booth.
Baptist were stronger when we preached election rather than worried about elections.
JTR
Posted by Jeffrey T. Riddle at 3:13 PM