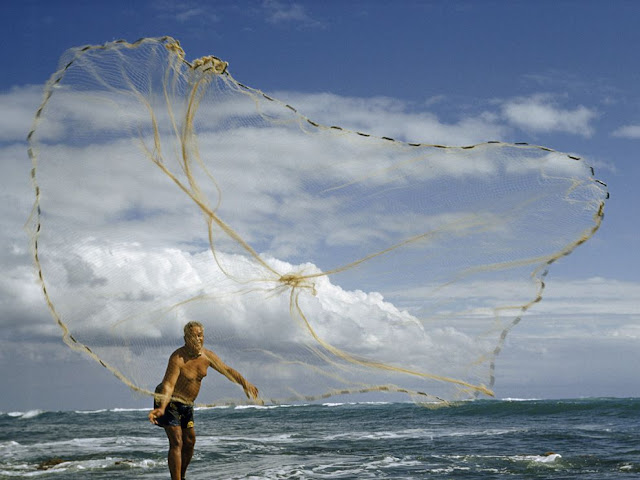 And he saith unto them, Follow me, and I will make you fishers of men (Matthew 4:19).

We are continuing to track the life of Christ as faithfully recorded in Matthew.

We have learned of Christ’s birth in Bethlehem, his rearing in Nazareth, his baptism by John, his temptation in the wilderness, and his preaching in Capernaum and throughout Galilee. Now we read of how Christ drew men to himself and called them to become his disciples.

A disciple is a student or a follower, something like an apprentice. How did you learn a trade in the first century? You followed an expert around and learned from him by watching his example and listening to his words. Many trades and professions still work that way today (from plumbers to physicians).

Christ is the master teacher, and his disciples or followers are his students. To become a believer is to enter the school of Christ and to learn from him.

Matthew 4:18-22 describes the call extended to two sets of brothers: Peter and Andrew, and James and John. They would be among the original Twelve apostles and would be mightily used of God. There is value in seeing the call of the men Christ sovereignly chose to be the pillars of his church.

There are also general things we learn here about discipleship that apply to any of us, who will never be apostles, about what it means to follow Christ.

First, Christ also sees us and calls us to follow him. “If any man will come after me, let him deny himself, and take up his cross daily, and follow me” (Luke 9:23).

The first disciples were ordinary fishermen. Later when the apostles preach Jesus in the temple, the authorities will take note of their boldness marveling that they were “unlearned and ignorant men” that “had been with Jesus” (Acts 4:13).

Notice that they left their nets behind. Whatever our other vocation, we have a new primary vocation and that is serving Christ. For some it will be, in fact, a call to the vocational ministry, for all God’s people, however, there will be a call to be part of the great work of evangelism, drawing in the gospel net and seeing men and women come to Christ.

Notice that James and John left their father behind. Christ must have first place above all our human relations, precious though they may be.

Christ calls us to count the costs (cf. Luke 14:25-33). Don’t start a tower you can’t finish. Don’t enter a battle that you will later flee from. After counting the costs, however, one should also respond with immediacy and with joy. Let us put our hand to the plow and never look back. In the end, we will find that it will have all been worth it!