The Vision (2.19.21): The Preaching Ministry of the Lord Jesus Christ 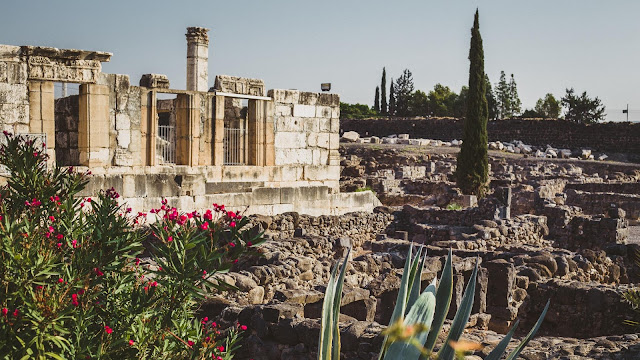 Image: Ruins of the ancient synagogue of Capernaum. Matthew 4:13: "And leaving Nazareth he came and dwelt in Capernaum...."

From that time Jesus began to preach, and to say, Repent: for the kingdom of heaven is at hand (Matthew 4:17).

Matthew begins his account of Christ’s public ministry by placing the spotlight on the Lord Jesus as a preacher.

His ministry did not begin with the performing of miracles, signs and wonders, though he had the power and authority to do such things.

It did not come with him leading a political movement. Thus, the Lord Jesus will say to Pilate: “My kingdom is not of this world” (John 18:36).

It did not come with him establishing an army. Later in Matthew, when the Lord Jesus is arrested and Peter draws a sword to defend him, Christ will say to Peter, “Put up again thy sword into his place: for all they that take the sword shall perish with the sword” (Matt 26:52).

He did not come as a community organizer, trying to make things just a little bit better for everyone.

He did not come as a social worker, as a psychologist, or as a counselor, saying, “Let me help to soothe your troubled mind.”

He came as a preacher. He came to exercise the ministry of the Word. To proclaim God’s Word has it had been revealed to man. What was the content of his preaching as Matthew summarizes it?

His first word was, “Repent….”

Christ’s first word to men was not, “You are OK just the way you are, and you need to just love yourself and live your best life now.” No, his first word was that you need to change. You need a change of heart that leads to a change of mind and life.

His second word was, “The kingdom of heaven is at hand.” The rule and reign of God is present now in me and my ministry. He will tell his disciples in Luke 17:21, “the kingdom of God is within you.” Heaven has broken into earth, awaiting the day when God will be all in all.

You will notice that the Christ’s preaching seems to be exactly what John preached (cf. Matt 3:1-2). The difference is that John was the opening act and Christ was the main event. John said he baptized with water unto repentance, but Christ would baptize with the Holy Ghost and with fire (3:11). Christ would tell men not only to repent of their sin, but also to believe in him. John 3:16: “For God so loved the world, that he gave his only begotten Son, that whosoever believeth in him should not perish, but have everlasting life.”

Christ still preaches to men through his Word and the ministry of his servants, calling upon them to repent and to believe in him.