Six Key Themes in the Epistle of James 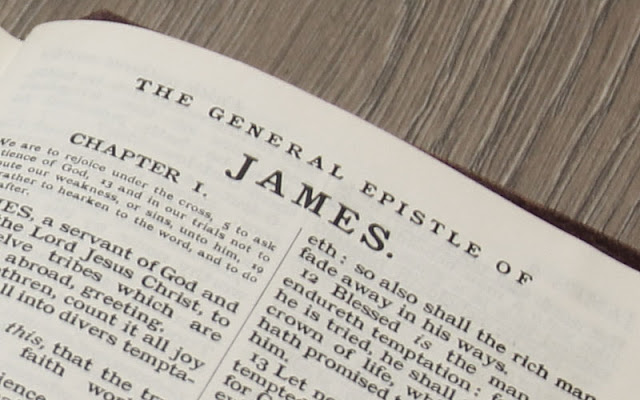 In last Sunday's introductory sermon in our new series on James, I suggested that the following six key themes in this epistle:

First, James was part of the Jewish mission to the church and was likely originally directed primarily to Jewish Christians, though now it is relevant to all Christians whatever, Jew and Gentile, male and female, slave and free.

Second, James assumes that those who read this letter already know the basic facts about the life of Jesus, including his death, burial, and resurrection. The words “cross”, “resurrection,” and “gospel” do not appear in James.

Third, James is a practical book that focuses on ethics or the proper living out of the Christian life. James knows the ethical teaching of Christ including the command to love one neighbor as oneself (cf. 2:8), and he knows the teaching of Christ from the Sermon on the Mount (cf. 4:12: “who art thou that judgest another?” and Matthew 7:1: “Judge not, that ye be not judged.”).

Fourth, James is a wisdom book. This theme begins early (1:5: “If any of you lack wisdom, let him ask of God….”) and continues throughout (cf. e.g., 3:17). It is like the book of Proverbs in the OT with many wise saying to instruct us how to live our lives skillfully to the glory of God and to avoid foolishness and failure.

Fifth, James focuses on the importance of good works in the Christian life. One of its clear themes is that faith without works is a dead faith (see 2:17, 20). This is one of the most controversial aspects of James. How can it be reconciled with Paul’s teaching in Galatians 2:16 that “a man is not justified by the works of the law, but by the faith of Jesus Christ”?

Perhaps you’ve read somewhere how Martin Luther once expressed some concerns about James, even calling it a “right strawy epistle, and that some radicals even wanted to remove James from the NT. But Luther eventually came to see that James was not at odds with Paul and the wiser men acknowledged that “It is dangerous to loosen foundation stones” (Manton, 9).

The Puritan Thomas Manton noted the core of James’s message on this point as follows: “But in Christ there are no dead and sapless branches; faith is not an idle grace; wherever it is it fructifieth in good works” (9). More contemporary preachers are fond of saying that though we are saved by grace alone through faith alone in Christ alone, the faith we have is never alone. It is accompanied by good works as the sign of spiritual life in us. Or perhaps you have heard it said that works are the fruit but not the root of our faith.

Sixth, James stresses the importance of perseverance in the Christian life in the face of struggles, setbacks, frustrations, and trials. We get some sense of what many of these early Jewish Christians suffered when we look at Paul’s letter to the Hebrews when he writes about those who after they were "illuminated" suffered "a great fight of afflictions", including being made a "gazingstock", while taking "joyfully" the "spoiling" of their goods (Hebrews 10:32-34).