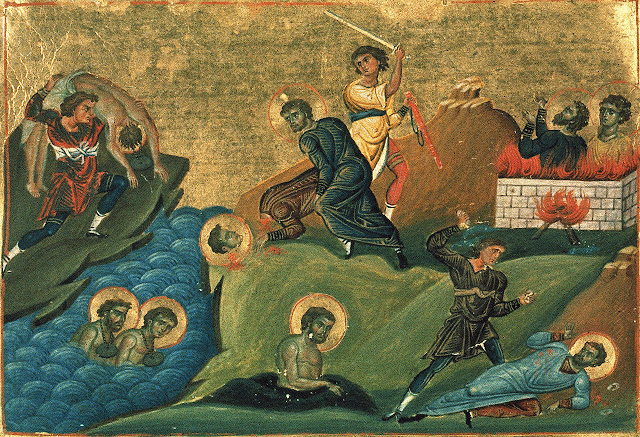 Image: Martyrdom of Anthimus of Nicomedia and others, Miniature from the Menologion of Basil II, c. AD 1,000.

This is an occasional series of readings from and brief notes and commentary upon Eusebius of Caesarea’s The Ecclesiastical History: Book 8, chapter 13.

This chapter begins by listing the various rulers of the churches who became martyrs during the Diocletian persecution.

First in the list is Anthimus, bishop of Nicomedia, who was beheaded.

Others include the presbyter Lucian of Antioch;

Silvanus, bishop of Gaza, beheaded at the copper mines at Phaeno, one of 39 martyrs there;

Peleus and Nilus, bishops of Egypt;

Pamphylius, presbyter of Caesarea, whom Eusebius describes as “the most marvelous man of our day”;

To these could be added “countless other famous persons as well.” Eusebius promises to write more in another work.

The chapter then turns to discuss the Roman government. This is typical of Eusebius, to parallel descriptions of church and imperial leaders.

He notes that before the time of persecution, the Christians had enjoyed peace and prosperity.

Reference is made to the so-called Tetrarchy, set up by Diocletian, in which power was shared between Diocletian and Maximin, as emperors, and Galerius and Constantius Chlorus, as Caesars.

It was under the Tetrarchy that the persecution had begun in 303, and which would last a decade till 313.

Eusebius notes that Diocletian fell under a “fateful disease” and became “deranged”, and this resulted in him resuming life as a private citizen in 306.

According to Eusebius, of the Tetrarchs, only Constantius (father of Constantine) lived “in a manner worthy of his high office” and did not persecute the Christians or tear down their churches, but even protected them.

His son Constantine was made emperor (one of the Tetrarch) after his death “by God Himself, the King Supreme.”

The chapter closes with reference to the later struggle for power between Constantine, Licinius, and Maximin, which resulted in the deposition and death of Maximin and the removal of his public monuments and memorials.