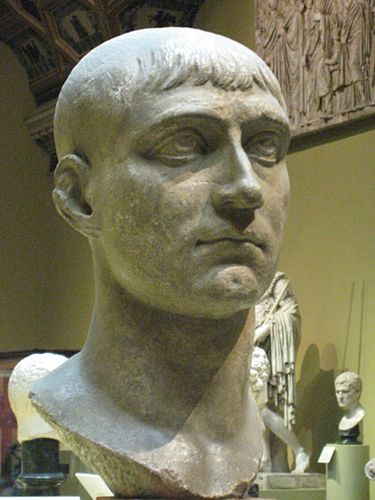 Image: Bust of Maxentius (AD 276-312; Roman emperor 306-312). Pushkin Museum, Moscow.
This is an occasional series of readings from and brief notes and commentary upon Eusebius of Caesarea’s Book 8, chapter 14-15.

These chapters describe political turmoil that arose during the decade long Diocletian persecution, which included the rise of two tyrants: Maxentius in the West (Rome) and Maximin in the East. This volatility would lead ultimately to the rise of Constantine as emperor.

Chapter 14 describes the rise of Maxentius, son of the deposed Maximin, as the tyrant of Rome. Not only did he persecute Christians, but he lived a life of gross moral debauchery, which included forced adultery and rape. He put many Romans, including senators, to death. Worst of all he engaged in witchcraft and magical practices, including ripping up pregnant women to explore the entrails of their fetuses. He is described by Eusebius as a Caligula-like figure.

Meanwhile, another tyrant arose in the East named Maximin (aka Maximinus Daia). He also practiced magic and was filled with superstitions. He energetically persecuted Christianity and attempted to restore paganism, including ordering pagan temples to be built in every city. He engaged in drunken excesses, riotous living, and the sexual assault against women.

The only ones who opposed him were the Christians, who suffered greatly under his persecution. Eusebius notes how a Christian lady [Dorothea, according to Rufinus] of Alexandria rebuffed Maximin in order to maintain her modesty.

He then notes how a woman of Rome [Sophronia, according to Rufinus] was likewise attacked by Maxentius but took her own life by the sword.

Chapter 15 notes that during the remainder of the ten years of persecution there was no respite from the plotting and warring of the two tyrants. Even travelers on the sea were not safe, as they might be accused of siding with the enemy and made subject to torture, including death by crucifixion or fire.

These chapters again describe the disorder within the empire and the rivalry among the tryants Maxentius and Maximin, which would eventually lead to the rise of Constantine, who would end persecution and bring peace to the church.