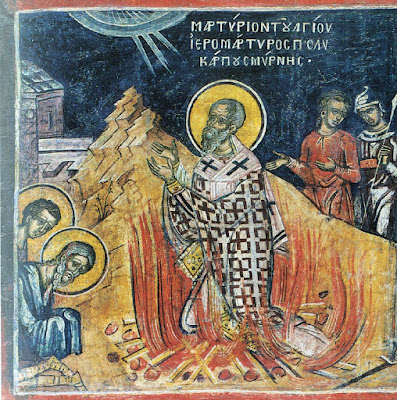 Image: A depiction of the martyrdom of Polycarp of Smyrna (69-155).

Regarding Polycarp of Smyrna:

Polycarp was the bishop of Smyrna, an early center of Christianity in Asia Minor (see Rev 2:8-11). The dates for his life are traditionally set as AD 69-155. Eusebius, however, says he was put to death during the reign of the Roman Emperor Marcus Aurelius (161-180) which would move the dates for his life further back (see EH IV.XIV). As a younger man he had met with Ignatius of Antioch when Ignatius passed through Smyrna on his way to martyrdom in Rome (c. 107). One of Ignatius’ seven letters was directed to Polycarp.

In the report of his martyrdom he claims to have served Christ for 86 years. Does this mean he was 86 and had been baptized as an infant? Or was he saying that he had, in some way, been serving the Lord (even before his conversion)? Or had he perhaps been converted as, say, a ten year-old child and met his death at age 96? We do not know.

Louth notes that both Tertullian and Irenaeus reported that he had been a direct disciple of the apostle John (125).

Irenaeus here makes reference to being in Polycarp’s house as a child and listening to him firsthand as he “reported his intercourse with John and the others who had seen the Lord.” He recalls that he listened eagerly and made notes “not on paper, but in my heart.”

He also notes here how he saw Polycarp in his childhood and reports that he “constantly taught those things which he had learned from the apostles.”

It reports that he visited Rome and many heretics were converted under his ministry.

It is said that he told how he was with John in Ephesus in the baths when the Gnostic Cerinthus entered and John fled saying, “Let us flee, lest even the bath-house fall in, for within is Cerinthus, the enemy of the truth.”

It is also said that on a visit to Rome he met the Gnostic Marcion who demanded he recognize him, to which Polycarp responded, “I do, I recognize the first-born of Satan!” Compare his “Away with the infidels!” quip in the martyrdom report.

We have two documents related to Polycarp: (1) a letter from Polycarp to the Philippians and (2) an account of Polycarp’s martyrdom.

1.    Polycarp to the Philippians:

This letter is from Polycarp and his “clergy” (elders) to “the colony of God’s Church at Philippi” in Macedonia. We have Luke’s report of this church’s founding in Acts 16 and Paul’s letter to this church.

Polycarp apparently wrote this earlier in his ministry with regard to the journey of Ignatius of Antioch through Philippi.

In chapter 1 he speaks those in chains as “badges of saints” (Louth says this is likely Ignatius and his fellow prisoners).

In chapter 2 he offers exhortations which include this, “and bear in mind the words of our Lord in his teaching” and proceeds to quote from the Sermon on the Mount.

This leads to one of the key values of this letter: Its frequent citations from various NT books, showing the early acceptance and authority of the NT books.

In chapter 3 Polycarp notes that he does not have the wisdom of “our blessed and glorious Paul.” Note: He acknowledges that the age of the apostles has passed.

In this chapter he also makes reference to faith, hope, and love, likely drawing on 1 Corinthians 13, though not directly quoting any verses.

In chapter 5 he speaks about deacons being beyond approach and he also gives exhortations to younger men and women (as in Titus 2), as well encouraging obedience to elders and deacons (as in Ignatius).

In chapter 7 he cites 1 John 4:2-3 regarding the antichrists who deny that Jesus has come in the flesh. He adds: “To contradict the evidence of the cross is to be of the devil.”

In chapter 9 he calls for holiness recalling the examples of godly men, including Paul and the apostles. Again, this reflects his awareness of the apostolic age having passed.
In chapter 10 he urges the Philippians, “Stand firm,” and adds: “Be fixed and unshaken in your faith; care for each other with a brother’s love, and make common cause for the truth.”

Note that Louth sees here a citation (or allusion?) to Tobit 12:9. It might be a citation, but that does not mean that Polycarp saw the apocrphya as Scripture, while there is no doubt that he sees the NT as Scripture.

In chapter 11, Polycarp makes reference to an elder named Valens who had failed in his ministry, perhaps due to an “excessive fondness for money.”

He also cites 1 Cor 6:2 as Paul’s teaching and refers to the Philippians as those “with whom the blessed Paul labored.” Think about it. He is writing to some who had perhaps known Paul personally!

In chapter 13 he notes that he is sending along Ignatius letters by the hand of Crescens (ch. 14).

This is a very valuable letter.

Louth says this is considered “the earliest surviving authentic account of Christian martyrdom outside the NT” (127). It is in the form of a letter sent from the church at Smyrna to the church at Philomelium in Phrygia. It is signed by the scribe Evarestus.

The letter begins by noting the heroic deaths of Christian martyrs including one named Germanicus who was given over the beasts. But this does not satiate the blood lust of the pagans who screamed, “Down with the infidels! Go and find Polycarp!” (ch. 3).

The author also mentions the failure of a man named Quintus who had voluntarily offered up himself, but then suffered a failure of nerve, took the oath and offered incense to Caesar (ch. 4). The author argues against such volunteering for martyrdom, perhaps tempering the zeal demonstrated by Ignatius.

Polycarp was not alarmed but was urged to leave the city. He left for the country, but three days before his arrest while in prayer he had a vision of his pillow on fire and told his companions, “I must be going to be burned alive” (ch. 5).

He went to a farm but the authorities tracked him down, tortured  slave boy to find his precise whereabouts, and encircled the place where he was staying late at night. Polycarp then surrendered himself, saying, “God’s will be done.” He calmly greeted those coming to arrest him, chatted with them, and they were struck by his calmness (cf. the calmness of Socrates before his death in Plato’s Apology).

He was brought into the city riding on a donkey (paralleling the triumphal entry) and urged to say, “Caesar is Lord” (ch. 8). He refused and was taken to the city circus.

When the governor urged him, “Revile your Christ!” he offered his famous reply, “Eighty and six years have I served Him, and He has done me no wrong. How can I blaspheme my King and my Saviour?”

When the governor persisted, Polycarp told him, “I am a Christian” and if you want to know more about the meaning of Christianity, just name the day and hour and I will explain it to you (ch. 10).

When the governor threatened to burn him to death lest he recant, he replied, “The fire you threaten me with cannot go on burning for very long” (ch. 11).

He was eventually condemned to be burned and taken to the place of execution, stripped of his clothing, and tied to a stake to be burned (ch. 13).

The author said he was “like a noble ram” offered as a sacrifice (ch. 14). He lifted his eyes to heaven and thanks God that he might be “numbered amongst the martyrs.”

When the prayer ended, the fire was lit, but miraculously there was something like a “hollow chamber” formed around his figure and he was “like a loaf baking in the oven” that emits a “delicious fragrance” (ch. 15). There are, no doubt, allusions here to the three Hebrew youths in the burning fiery furnace in Daniel 3.

Finally, some “ruffians” were sent in with daggers to stab Polycarp. When, they did a dove flew out from his body and such a “copious rush of blood” issued from him that it extinguished the flames (ch. 16). The final verdict of the author is that Polycarp was clearly a great man among the elect, who “combined both apostle and prophet in his own person.”

The author notes how the authorities tried to stop the Christians from taking Polycarp’s remains as relics, fearing lest, “they should forsake the Crucified and take to worshipping this fellow instead” (ch. 17).

A centurion, however, took the body and had it burned and the Christians were able to gather up the bones, which to them were “more precious to us than jewels, and finer than pure gold” (ch. 18). The author also notes their practice of assembling where these remains were and remembering “the birthday of his martyrdom.”

Louth notes that this work provides “the earliest evidence for the preservation of the relics of the martyrs … and for the celebration of the anniversary of the martyrdom, the ‘heavenly birthday’ of the saint” (117).

The author concludes: “Not only was he a famous Doctor, he was a martyr without a peer; and one whose martyrdom all aspire to imitate, so fully does it accord with the Gospel of Christ” (ch. 19).

First: Polycarp was a student of John the apostle and an important transition figure from the age of the apostles to the post-apostolic age.

Second: His epistle to the Philippians shows how the NT was being looked to as Scripture from the earliest times.

It includes many more legendary elements and a focus on relics and memorials, not seen in the NT accounts. This demonstrates a drift from the apostolic accounts that will continue and which will attempt to be purified during the Reformation.

It remains a source of inspiration and encouragement for believers today, especially for the persecuted church.