Idea for a Video Cover of "Imagine" 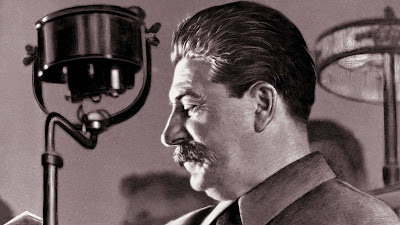 The other day I was driving along and the John Lennon song “Imagine” came on the air. This is one of the my all-time least favorite pop songs. This anti-religion rant is one of the most self-righteous, hateful and hypocritical of all time, as it indiscriminately bashes all religious belief in the supposed name of tolerance.

The thought came to my mind that I’d like to see someone make a cover video of the song. As the music begins, I see the camera focusing in on a group of swaying figures come together for a “We Are the World”-esque rendition of the number. Among the figures are Vladimir Lenin, Joseph Stalin, Mao Zedong, Pol Pot, Adolf Hitler, Fidel Castro, and Hugo Chavez. They form the chorus as various singers step to the mic for their solos:

Stalin:
Imagine there's no heaven
It's easy if you try

Pol Pot:
No hell below us
Above us only sky

Chorus:
Imagine all the people living for today

Hitler:
Imagine there's no countries
It isn't hard to do

Lenin:
Nothing to kill or die for
And no religion too

Chorus:
Imagine all the people living life in peace, you

Stalin:
You may say I'm a dreamer
But I'm not the only one

Castro:
I hope some day you'll join us
And the world will be as one

Mao:
Imagine no possessions
I wonder if you can

Chavez:
No need for greed or hunger
A brotherhood of man

Chorus:
Imagine all the people sharing all the world, you

You may say I'm a dreamer

But I'm not the only one

I hope some day you'll join us

And the world will be as one

Excellent! I love it. Now you need to find a talented digital artist.