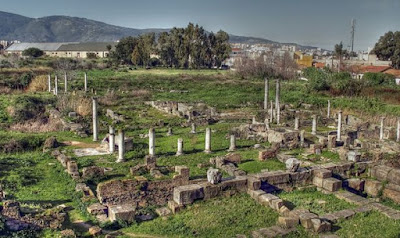 Augustine’s On Christian Doctrine is a classic early Christian work on the topic of Biblical hermeneutics.  The great North African theologian apparently began the work in c. AD 396, completing books I, II, and III (through paragraph 35).  He returned to it in AD 427, finishing book III and completing the work with book IV.

At one point (in paragraph v) he encourages Christian teachers, especially those less gifted in speaking and rhetorical abilities, to make extensive use of Scriptural language in their speech.  For Augustine study of the Bible is more important than study of secular rhetoric in making one an effective teacher:

For one who wishes to speak wisely, therefore, even though he cannot speak eloquently, it is above all necessary to remember the words of Scripture.  The poorer he sees himself to be in his own speech, the more he should make use of Scripture so that what he says in his own words he may support with the words of Scripture.  In this way he who is inferior in his own words may grow in a certain sense through the testimony of the great.  He shall give delight with his proofs when he cannot give delight with his own words.  Indeed, he who wishes to speak not only wisely but also eloquently, since he can be of more worth if he can do both, should more eagerly engage in reading or hearing the works of the eloquent and in imitating them in practice than in setting himself to learn from the masters of the art of rhetoric…..