Thomas Boston on the "balance of the sanctuary" 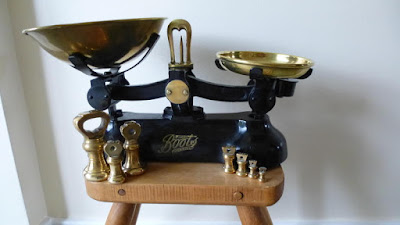 Note:  I finished reading today the last chapter in Thomas Boston's Human Nature in its Fourfold State (1720) [read online here].  The final chapter is a sober address titled "Hell."  At the close, Boston admonishes the reader to use the "balance of the sanctuary" to weigh his life:

Here is a balance of the sanctuary, by which we may understand the lightness of what is falsely thought weighty; and the weight of some things, by many reckoned to be very light.

Some things seem very weighty, which, weighed in this balance, will be found very light–

Weigh herein all worldly profits, gains, and advantages; and you will quickly see, that a thousand worlds will not compensate for an eternity of woe! 'For what is a man profited, if he shall gain the whole world, and lose his own soul?' (Matt 16:26). Weigh the pleasures of sin, which are but for a season, with the fire that is everlasting, and you show yourself to be fools and madmen, to run the hazard of losing the one for the other.

(b) Weigh your afflictions in this balance, and you will find the heaviest of them very light, in respect of the weight of eternal anguish. Impatience under affliction, especially when worldly troubles so embitter men's spirits that they cannot relish the glad tidings of the Gospel, speaks great regardlessness of eternity.

As a small and inconsiderable loss will be very little at heart with him who sees himself in danger of losing his whole estate; so troubles in the world will appear but light to him who has a lively view of eternity. Such a one will stoop and take up his cross, whatever it be, thinking it enough to escape eternal wrath.

(c) Weigh the most difficult and uneasy duties of religion here, and you will no more reckon the yoke of Christ insupportable.

Repentance and bitter mourning for sin, on earth, are very light in comparison of eternal weeping, wailing, and gnashing of teeth in hell! To wrestle with God in prayer, weeping and making supplication for the blessing in time, is far easier than to lie under the curse through all eternity! Mortification of the most beloved lust is a light thing in comparison with the second death in hell!

(d) Weigh your convictions in this balance. O how heavy do those lie upon many until they get them shaken off! They are not disposed to continue with them, but strive to get clear of them as of a mighty burden. But the worm of a bad conscience will neither die nor sleep in hell, though we may now lull it asleep for a time.

And certainly it is easier to entertain the sharpest convictions in this life, so that they lead us to Christ, than to have them fixed forever in the conscience, and to be in hell totally and finally separated from Him.


But, on the other hand, weigh sin in this balance, and, though now it seems but a light thing to you, you will find it a weight sufficient to turn up an eternal weight of wrath upon you.

Even idle words, vain thoughts, and unprofitable actions, weighed in this balance, and considered as following the sinner into eternity, will each of them be heavier than the sand of the sea! Time idly spent will make a weary eternity!

Now is your seedtime; thoughts, words, and actions, are the seed sown, eternity is the harvest. Though the seed now lies under the clod, disregarded by most men, even the least grain shall spring up at length; and the fruit will be according to the seed (Gal 6:8), 'For he that sows to his flesh, shall of the flesh reap corruption, (that is, destruction), but he that sows to the Spirit shall of the Spirit reap life everlasting.'

Weigh in this balance your time and opportunities of grace and salvation, and you will find them very weighty. Precious time and seasons of grace, Sabbaths, communions, prayers, sermons, and the like, are by many, now-a-days made light of; but the day is coming when one of these will be reckoned more valuable than a thousand worlds by those who now have the least value for them! When they are gone forever, and the loss cannot be retrieved, those will see the worth of them who will not now see it.
Posted by Jeffrey T. Riddle at 11:59 AM