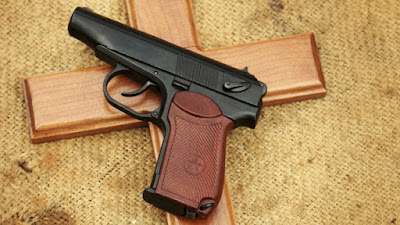 Note:  Last Sunday (1.3.16) in our first Lord's Day of the month adult Bible study, we discussed the recent, much-discussed and controversial article from John Piper on guns and self-defense.  I recorded the notes (below) from the discussion and posted them to sermonaudio.com (Listen here).

Who is John Piper?

Piper (b. 1946) is the former pastor of Bethlehem Baptist Church (serving from 1980 to 2013), the Chancellor of Bethlehem College and Seminary, and the founder of Desiring God ministries, all based in Minneapolis, Minnesota.

Piper was a leader in revival of interest in “New Calvinism” (Calvinistic soteriology) known for his passionate preaching style and for his many books, including Desiring God:  Meditations of a Christian Hedonist (1986).

In his later years Piper has shown a tendency to veer into controversial and unsafe territory.  One of his weakness, doctrinally speaking, is that he is not confessionally Reformed.  Another is his tendency to lack discernment in his associations (e.g., He has invited men like Rick Warren and Mark Driscoll to speak at his influential Shepherd’s Conferences for pastors.).  He is also a continuationist, and he rejects the validity of the moral law (i.e., his views seem more in line with New Covenant theology rather than classical covenant theology).

There has been much political discussion in the country over the issue of gun rights and gun control.  After the Islamic terrorist shooting in San Bernadino, Liberty University President Jerry Falwell, Jr. urged Liberty students to consider getting lawful permits to carry guns to protect themselves on campus if a shooting should occur.

Piper then wrote his article on December 22, “Should Christians Be Encouraged to Arm Themselves?”  which has been much shared on social media and probably more vilified than defended.

Note:  This is not the first time that Piper has stirred controversy on this issue.

1.  Paul called on Christians not to avenge themselves but to leave this is the civil government.

Response:  Piper wrongly judges the motives of Falwell and other Christians who choose lawfully to own guns.  Yes, it would be wrong to form vigilante gangs or to take justice into one’s own hands as a citizen to hunt down criminals.  But there is a difference between this and owning and using a gun according to the lawful rules of the land.

Response:  Piper misapplies passages having to do with Christian suffering due to state or religious persecution and issues related to lawful self-defense.

3.  Jesus taught that Christians would be opposed but did not urge Christians to arm themselves.

Piper appeals to the teaching of Jesus about how Christians should deal with persecution (cf. Matt 10:16-22).

Response:  Piper again misapplies passages having to do with Christians suffering state or synagogue sponsored persecution to issues related to lawful self-defense.

Note:  Surprisingly, for a German trained NT PhD and veteran pastor, Piper shows weakness in hermeneutics of these passages.

4.  Jesus set the stage for Christian living by refusing to advance the Christian cause with the sword.

Piper cites John 18:36 and Matthew 26:52 when Jesus disarmed his disciples before his arrest.

Response:  Piper against falsely judges the motives of his opponents and wrongly applies Biblical texts.  Yes, it would be wrong to attempt to convert persons at the end of a gun.  Yes, Jesus told his disciples not to resist his arrest, but this had more to do about his passive obedience to God’s design for the cross than it did with setting up a universal practice of pacifism (a concept which Piper apparently embraces).

5.  Jesus taught that we should love our enemies and not return evil for evil.

Note:  The title of Piper’s PhD dissertation was “Love Your Enemies.”

Response:  The right interpretation of the Sermon on the Mount has long been an issue in Christian theology.  There are those who are absolutists (those in the so-called  “Peace church”).  Others see this as the bedrock for personal Christian ethics which must be interpreted in light of other passages.

6.  The early church in Acts suffered without armed resistance.

Piper cites various passages in Acts to this end.

Response:  Again, Piper misapplies passages about persecution to the issue of lawful bearing of arms.

Response:  I agree that the usage here is likely metaphorical (cf.  Matt 10:34), though some might argue that Jesus was urging his disciples to be prepared.  In the end, the context indicates that Jesus was predicting division and persecution his disciples would experience as his disciples.  Again, this passage does not really apply to the issue of lawful gun ownership.

8.  Piper addresses the question, “Can I shoot my wife’s assailant?”

Piper seems to argue that self-defense is ambiguous in the NT.  He cannot say he would defend his wife or daughter if attacked.  He even suggests it might be wrong to call the police if one’s heart is not right.

Response:  Piper’s thinking here is muddled.  Ecclesiastes 3:8 says that in this fallen world there is time for war and a time for peace. Jesus did not teach absolute pacifism nor did the early Christians (cf. Christian soldiers who were converted were not told to lay down their arms:  Matthew 8 and Acts 10-11).  There is a Biblical command to protect the weak and defenseless (see Deuteronomy).  Jesus taught us to love our neighbor (cf. Mark 12:28-31), certainly this would involve the basic concern of defending our neighbor’s life.  Husbands are told to love their wives and to be willing to lay down their lives for them (cf. Eph 5:25) and Christians, in general, are told to provide especially for their family members.  Compare:

1 Timothy 5:8 But if any provide not [verb:  pronoeo:  to take thought for or to care for] for his own, and specially for those of his own house, he hath denied the faith, and is worse than an infidel.

In his 1983 essay “Who is For Peace?” Christian theologian Francis Schaeffer wrote:

This is why I am not a pacifist. Pacifism in this poor world in which we live –this lost world—means that we desert the people who need our greatest help.
Let me illustrate:  I am walking down the street and I come upon a big, burly man beating a tiny tot to death—beating this little girl—beating her—beating her.  I plead with him to stop.  Suppose he refuses?  What does love mean now?  Love means that I stop him in any way I can, including hitting him.  To me this is not only necessary for humanitarian reasons:  it is loyalty to Christ’s commands concerning Christian love in a fallen world.  What about that little girl?  If I desert her to the bully, I have deserted the true meaning of Christian love—responsibility for my neighbor.  She, as well as he, is my neighbor.

9.  Christian hope is not in armed defense.

Finally, Piper appeals to passages about Christian identity in the world.

Response:  This is another misapplication.  What does this have to do with this issue?

1. Piper embraces a narrow pacifistic interpretation of the Sermon on the Mount.
2. Piper misapplies numerous passages.
3. Christians should submit to the civil authority.
4. Christians have a right to lawful self-defense.
5. Ownership of guns is a matter of liberty of individual Christian conscience.
6. Pastors and Christians leaders should not seek to politicize such issues.
7. Churches might want to set prudential, reasonable, and mutually agreed upon policies for dealing with guns.
Posted by Jeffrey T. Riddle at 10:51 AM

This is a very good missive, Pastor Jeff. Even if I had to look a few words up, you delivered a sound fisking in a very reasonable manner.

Thanks MJ. If it's any consolation, I had to look up "fisking." Nice term to add to the vocab.