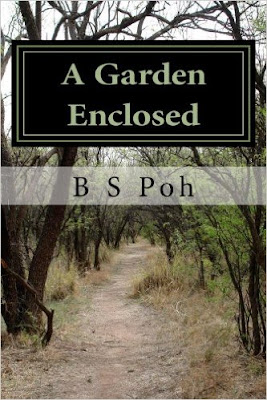 Note:  The first book I finished reading this year was Pastor Poh Boon Sing's "A Garden Enclosed" (Good News Enterprise, 2013). I have completed a draft of an extended review of the book that I hope to refine and share somewhere in the future.  This is an important work on Baptist ecclesiology that has not gotten the attention it deserves (whether one agrees with Poh's thesis or not).  Below are the opening couple of sections in the draft of my review:

Boon Sing Poh, A Garden Enclosed:  A historical study and evaluation of the form of church government practiced by the Particular Baptists in the 17th and 18th centuries (Good News Enterprise, 2013):  330 pp.

Poh Boon Sing is a Reformed Baptist Pastor in Kuala Lampur, Malaysia who has studied and written extensively in the area of ecclesiology.  A Garden Enclosed (hereafter AGE) is a work of historical theology tracing the form of church government practiced by the early Particular Baptists, the doctrinal forerunners to today’s Reformed Baptists.  The title is taken from Song of Solomon 4:12, 16.  This work served as Poh’s 2012 PhD thesis in Church History from North-West University, Potchefstroom, South Africa.

Background to the work

In many ways, this work is a continuation and expansion of Poh’s previous studies in ecclesiology and his dialogue with other pastors and scholars on this topic.  Poh’s important 1995 book The Keys of the Kingdom presented his Reformed Baptistic “Independency” view of church government, inspired by the ecclesiology of the influential Puritan John Owen. Among other things, Poh argued in that work for a distinction within the one office of elder between the teaching elder and the ruling elder, for a distinct and singular leading role for the minister or pastor (teaching elder) among the elders, and for elder rule with congregational consent (as opposed to democratic congregationalism) in the church.

Poh’s views in Keys of the Kingdom met with approval in some corners.  The book is used, for example, in theological education courses by London’s Metropolitan Tabernacle (Spurgeon’s former church, where Peter Masters is now pastor) and distributed through their bookshop.  It also met with critique and criticism from some corners.  Sam Waldron and others argued against Poh’s distinction in the office of elder in the booklet In Defense of Parity (1997).  Poh, in turn, responded to Waldron, et al in his booklet Against Parity (2006).  James Renihan challenged Poh’s assertion that this view of church government had been widespread among the early Particular Baptists in England (see Edification and Beauty, pp. 63-87).  Thus, AGE might be considered a continuation and expansion of the issues addressed in The Keys of the Kingdom, with particular attention to Particular Baptist history and a defense of his views, especially against the historical objections raised by Renihan.

AGE has a helpful abstract and preface which introduce the work.  This is followed by seven chapters:  (1) Introduction; (2) Autonomy; (3) The Headship of Christ; (4) Rule by Elders; (5) The Byways; (6) The Communion of Churches; and (7) Conclusion (including a discussion of unsettled issues and recommendations for moving forward).
Poh’s central thesis is that the likely majority practice of the earliest Particular Baptists (c. 1650-1750), under the influence of John Owen and others, was that of the “Independency” view of church government, including the existence and recognition of both teaching and ruling elders, a leading role for a singular pastor among the other elders, and elder rule with congregational consent.  Such a view is not contradicted by the Second London Baptist Confession (1689) but underlies it.  Later Particular Baptists, however, beginning especially with Benjamin Keach in the late seventeenth century, through to John Gill in the eighteenth century, altered this form of church government, in favor of the single pastor/multiple deacons model of democratic congregationalism.  Poh furthermore urges that the early Independent model of Particular Baptist ecclesiology be reclaimed in the modern context.  He also appeals to contemporary Reformed Baptists to reclaim the practice of “communion” among like-minded churches.
JTR
Posted by Jeffrey T. Riddle at 10:58 PM

Has brother Poh responded to this? I am sorting through all of this and am seeking counsel on how to best approach this matter. I appreciate Poh, Waldron, Renihan, and yourself and therefore would appreciate more on this important discussion. Thanks again for your feedback!

Has brother Poh responded to this? I am sorting through all of this and am seeking counsel on how to best approach this matter. I appreciate Poh, Waldron, Renihan, and yourself and therefore would appreciate more on this important discussion. Thanks again for your feedback!

Bryant, thanks for the comment. You can find Poh's response to the "In Defense of Parity" booklet here:

I'd also suggest reading Poh's "Keys of the Kingdom" if you have not already, as well "A Garden Enclosed."

Thank you for your response. I purchased Poh’s “Keys of the Kingdom" and a friend of mine purchased “A Garden Enclosed.”

I wanted to ask you a question about your practice at your church as it relates to the teaching elder (minister) and ruling elder categories. I have been persuaded by Poh’s response to the “In Defense of Parity” booklet. Something I am still a little unclear about (due to my lack of understanding) has to do with quantity. How many teaching elders (ministers) are permitted for this model of church government to consistently function and honor the teaching of Scripture (and church history) on it? Is one teaching elder and one (or more) ruling elders the ideal? If a local church is growing in number and church planting does not take place for whatever reason, would a second teaching elder be permissible? Even if the congregation can afford to support another minister? Lastly, is there justification for any ruling elder to be financially supported as well? Appreciate your thoughts on all of this. It would help clarify some things for me and point me in the right direction. Thank you!

I think it is possible to have more than one teaching elder (minister) and ruler elder, depending on the size of the church, its needs, and available called and qualified men. I know that Poh would likely argue that it is unlikely that a church would need more than one minister, since he would, of necessity, desire regularly to exercise his gift of preaching/teaching rather than share this duty with another. As for paying a ruling elder, I also think this is permissible based on context.

On these questions, I'd suggest reading John Owen's "The True Nature of a Gospel Church" in Vol. 16 of his Works. Or, you can read my simplified abridgment of this work titled, John Owen, "Gospel Church Government," if you can find a copy still in print.