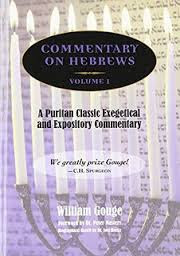 Note:  I started today a new sermon series on the book of Hebrews with a message titled "To the Hebrews" (Hebrews 1:1-2).  In this opening message I asked four foundational questions about Hebrews, beginning with: "Who is the author of this book?"

If you have a King James Version of the Bible, the full title of this book is given as:  “The Epistle of Paul the Apostle to the Hebrews.”
That conveys the fact that many Christians down through the years have believed that this book was written by the apostle Paul.  If this is so, Hebrews would be the 14th of Paul’s epistles in the NT.  Indeed, in our English Bibles it appears just after the Pauline corpus, after Philemon.  In many ancient Greek NTs it appeared after 2 Thessalonians and before 1 Timothy (see the order in the Robinson/Pierpont edition of the Byzantine Greek NT).

The authors of the two greatest Puritan commentaries on the book of Hebrews believed that the book was written by Paul.

William Gouge (1575-1653), described as an “arch Puritan,” preached more than a thousand sermons over a thirty year period on Hebrews.  In his commentary made from those sermons, which some describe as his magnum opus, he declares the “penman” of Hebrews “to be Paul the apostle” (Hebrews, Vol. 1, p. 4).

John Owen (1616-1683), the “Prince of the Puritans,” wrote a colossal commentary on Hebrews that fills seven volumes.  In the first volume of that work he includes an over 30 page essay in which he argues that the apostle Paul was the author of Hebrews (see Exercitation II, Hebrews, Vol. 1, pp. 65-92).

Why would they say that Paul wrote this book?  Here are a few reasons:

1.  This was the testimony of many in the ancient church.

3.  The author makes at least one reference to justification by faith, one of the Paul’s favorite themes (10:38).

4.  The author mentions Timothy who was one of Paul’s companion in his ministry (13:23).

7.  It was suggested by the old interpreters (Gouge, Owen, Poole) that Peter likely refers to Hebrews in 2 Peter 3:15-16.

But there is one big problem with the idea of Paul’s authorship of Hebrews:  His name never appears explicitly in the book designating him as the author (as it does in every one of his epistles).

Some of the old interpreters suggest that Paul might have done this because his views were so controversial among some Jewish Christians he feared it might prevent “their reading or weighing of it as they ought” (Poole).

Some of the ancient titles of the book, indeed, simply read “To the Hebrews” without naming Paul.

This led to many other speculations about others who might have written the book, including Luke, Barnabas (Acts), Clement (Phil 4:3), and Apollos (Acts 18: 1 Cor 1), among others.  Clement of Alexandria suggested that Paul wrote the book in Aramaic and Luke translated it into Greek.

When the great Reformer John Calvin wrote his commentary on Hebrews he acknowledged the traditional views of Pauline authorship but concluded:  “I, indeed, can adduce no reason to shew that Paul was its author” adding that “the manner of teaching and the style, sufficiently shew that Paul was not the author.”

Indeed, one of the ancient Church Fathers Origen wrote of the question of Hebrews’ authorship:  “What is the very truth in this matter only God knows” (as cited in Owen, Hebrews, Vol. 1, p. 67).

Though I think there is good reason to believe that Paul wrote this book, we have to rest content without being able to say that for sure.  This is a matter of the sufficiency of Scripture.  The Bible does not tell us everything that we could possibly know, but it tells us everything we need to know.

What makes Hebrews or any other book of the Bible Scripture is not merely the fact that it might have been written by an apostle.  Indeed, some books were clearly written by men who were not apostles (like Mark and Luke).  What makes Scripture Scripture is the fact that it is breathed out by God, no matter who the human penman was (cf. 2 Tim 3:16).  And it is truly apostolic because the apostles first, and the believers then and in all ages thereafter, recognized that it was the Word of God.

Owen:  “Hence an anxious inquiry after the penman of any part of Scripture is not necessary” (Hebrews, Vol. I, p. 67).

Calvin says, speaking specifically of Hebrews:  “I, indeed, without hesitation, class it among apostolical writings….  There is, indeed, no book in the Holy Scriptures which speaks so clearly of the priesthood of Christ, so highly exalts the virtue and dignity of that only true sacrifice which he offered by his death, so abundantly treats of the use of ceremonies as well as their abrogation, and, in a word, so fully explains that Christ is the end of the law.”