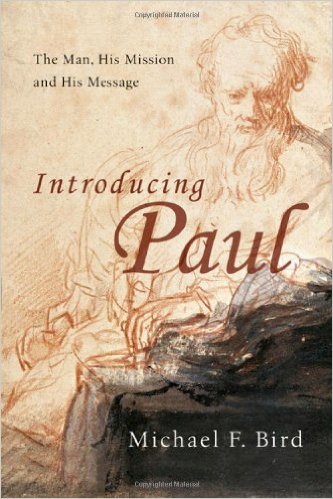 Note:  Just about every semester I teach a college course titled “New Testament and Early Christianity.”  In addition to the Bible and the main textbook I generally also assign a brief secondary book on the life and letters of Paul.  Last semester, I made use of Australian evangelical scholar Michael F. Bird’s Introducing Paul.   This semester I am using Anthony C. Thiselton’s The Living Paul (IVP Academic, 2009) and next semester I plan to use Thomas R. Schreiner’s Interpreting the Pauline Epistles, Second Ed. (Baker Academic, 2011).  Here is my summary of each chapter and my final evaluation of Introducing Paul:

There are five images that emerge for Paul:  persecutor, missionary, theologian, pastor, martyr.

Paul was a maverick and a controversialist.

2.  A funny thing happened on the road to Damascus

Paul was “the last person” one would have expected to become a Christian (p. 37).

3.  The stories behind the story

Here the focus in on the OT backgrounds for Paul’s thought:  God and creation; Adam and Christ; Abraham; Israel.

Brid also investigates Paul’s understanding of Jesus:  What did Paul know about the historical Jesus?  Bird says Paul does not “play off” the “Jesus of history” and the “Christ of faith” (p. 55).  Also important is Paul’s view of the ekklesia as the people of God.

Bird also notes how Paul’s gospel and its declaration that “Jesus is Lord” would have brought him into conflict with Caesar.

“The centre of Paul’s gospel is the death and resurrection of Jesus Christ, the Lord and Messiah” (pp. 90-91).

This chapter offers a survey of various concepts Paul uses to describe the significance and meaning of the cross and resurrection:  righteousness [justification and imputation; note:  Bird does not see imputation as explicit but implicit in the text of Paul]; sacrifice [note:  Bird sides with Leon Morris against C. H. Dodd in favoring “propitiation” over “expiation”; he also gives a nuanced affirmation of “penal substitution”]; reconciliation; redemption; adoption; renewal [note the discussion here:  Bird might be accused of confusing justification and sanctification]; victory.

Paul anticipates large numbers of Jews being converted in the future.

Note:  Bird rejects dispensationalism but holds to a messianic or millennial reign of Christ on earth after the parousia (some form of either historic premillennialism or post-millennialism?).

8.  One God, one Lord:  monotheism and the Messiah

Paul was a messianic monotheist:  “God is known through Jesus the Messiah, or Jesus is the one who reveals and manifests the person and work of God” (p. 125).

9.  Living a life worthy of the gospel:  the ethics of Paul

Paul taught that when one becomes a Christian he undergoes a “fundamental shift” (p. 135).

Bird rejects the idea of there being a “civil war” in believers but prefers to say shortcomings are due to failure to live as new creatures.

He offers a “pre-Christian” reading of Romans 7.  The “I” is Israel.

Paul sees the weakness of the law.  Bird rejects the Puritan distinction between law and gospel:  “Paul was not a Puritan in this regard” (p. 141).

He urges Christians to live fruitful lives following the example and teaching of Jesus.

Bird rejects the ongoing validity of the moral law.  He writes, for example, "Surely the Ten Commandments feature prominently in the life of the Christian according to Paul?  To put it bluntly, not necessarily!" (p. 148).

Paul urged pursuit of things that lead to peace and urged liberty exercised in love to avoid both license and legalism.

Paul urged “cruciformity” (being shaped by the cross) and “anastasisity” (living with resurrection power).
11.  Epilogue

Final Evaluation:  Bird is an engaging and entertaining (even humorous) writer.  This book is an interesting read.  Unfortunately, it reflects many of the weaknesses typical of evangelical scholarship which attempts both to be conversant with modern scholarship and hold to orthodox Christianity.  On the positive side, Bird upholds the traditional view of authorship of all the Pauline epistles.  He also provides an uncompromising presentation of Paul’s views on human sexuality.  On the negative side, his views on imputation are weak.  He does not uphold a Reformed view of the law/gospel and of the abiding validity of the moral law (see chapter 9).  Also, he presents an egalitarian view of gender with regard to church office and public ministry.
Posted by Jeffrey T. Riddle at 11:57 AM