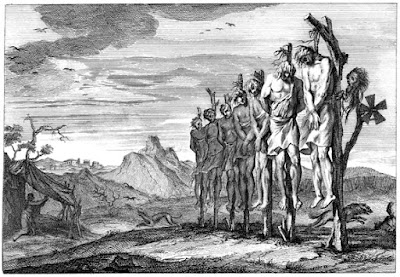 “Wherefore David said unto the Gibeonites, What shall I do for you? and wherewith shall I make the atonement, that ye may bless the inheritance of the LORD? (2 Samuel 21:3).

Last Sunday morning at CRBC I preached from 2 Samuel 21.  It is an unsettling chapter.  A famine strikes the land for three years due to King Saul’s sinful treatment of the Gibeonites.  When David approaches them, they demand that seven of Saul’s descendants be killed and their bodies hung or impaled.  David complies.  “And after that God was intreated for the land” (2 Samuel 21:14).

Old Testament commentator Dale Ralph Davis says of 2 Samuel 21:  “No one can evade the raw horror of this scene.  We can only try to understand (up to a point) what is happening” (see p. 223).  These seven men “become, as it were covenant-breakers who stand in the place of Saul.”

Davis adds that if you feel horror at this passage that is a good thing.  That is what you should be feeling.  He states:  “Readers should be aghast.  The text says atonement is horrible; it is gory.  Atonement is never nice but gruesome.”

He recalls all the Biblical sacrifices:

It was all mess and gore.  From the slicing the bull’s throat in Leviticus 1 all the way to Calvary God has always said that atonement is nasty and repulsive.  Christians must beware of becoming too refined, longing for a kinder, gentler faith.  If we’ve grown too used to Golgotha perhaps Gibeah (v. 6) can shock us back into truth:  atonement is a drippy, bloody, smelly business.  The stench of death hangs heavy wherever the wrath of God has been quenched.

The atoning sacrifice of these seven men was an imperfect sacrifice.  The Lord for his own sovereign purposes ended the famine and brought rain.  Yet this was just one broken covenant.  What atonement would be made for countless others, for myriads upon myriads of broken vows?  These were imperfect victims.  These were mere sinful men.  What type of perfect sacrifice would have to be offered to atone for the sins of the whole world?  This sacrifice only brought momentary relief to a time of famine.  What sacrifice could bring about not only temporal relief but eternal justification for sinners?

There is only one verse where the English word “atonement” is used in the AV of the NT:

Romans 5:11 And not only so, but we also joy in God through our Lord Jesus Christ, by whom we have now received the atonement.

If you read the context, it is clear that Paul that this atonement has been brought about by the death of Christ on the cross. Compare:

Romans 5:8 But God commendeth his love toward us, in that, while we were yet sinners, Christ died for us.

What 2 Samuel 21 points us toward is the mystery and the scandal of the cross.  This is a hard truth and even an impossible truth for unregenerate man to fathom.  The old liberal preacher Harry Emerson Fosdick called it a “slaughterhouse religion.”  I recently saw the atheistic scientist Richard Dawkins in a video railing against any notion that God had to kill his son in order to offer forgiveness. He said something like, “If he is God why can’t he just offer forgiveness without any sacrifice.”  But Dawkins misses the point.  This is not a natural truth.  It is not a human truth.  It is a divine truth and a revealed truth.

NT scholar Leon Morris in his classic work The Apostolic Preaching of the Cross observes:

He is a righteous God, even in justifying the ungodly; and the propitiation which he set forth in Christ Jesus, dying in His sinlessness the death of the sinful is the key to the mystery (p. 278).

David asked the Gibeonites:  “What shall I do for you and wherewith shall I make the atonement….?”

And the ultimate answer comes back:  It has been made in Christ.