Daniell: Tyndale "gave to English not only a Bible language, but a new prose." 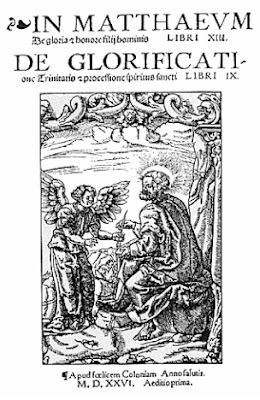 Image:  Facsimile of the  full page woodcut print of Matthew dipping his pen in a pot held by an angel, which prefaced Tyndale's translation of Matthew in the "Cologne Fragment."

I’m still enjoying David Daniell’s William Tyndale:  A Biography (Yale, 1994).  In his discussion of Tyndale’s early efforts at translating the Bible into English while in Cologne, Germany, Daniell offers this reflection on how Tyndale’s labors shaped the development of English prose:

Yet something more important is happening; the English into which Tyndale is translating has a special quality for the time, being the simple, direct form of the spoken language, with a dignity and harmony that make it perfect for what it is doing.  Tyndale is in the process of giving us a Bible language.  Luther is often praised for having given, in the ‘September Bible’, a language to the emerging German nation.  In his Bible translations, Tyndale’s conscious use of everyday words, without inversions, in a neutral word-order, and his wonderful ear for rhythmic patterns, gave to English not only a Bible language, but a new prose.  England was blessed as a nation in that the language of its principle book, as the Bible in English rapidly became, was the fountain from which flowed the lucidity, suppleness and expressive range of the greatest prose thereafter (pp. 115-116).
Posted by Jeffrey T. Riddle at 9:05 AM