"Still Alice" and ministering to those with Alzheimer's Disease 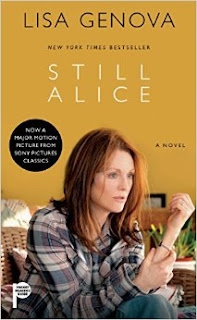 A couple of weeks ago I read the Lisa Genova novel Still Alice (Gallery Books, 2007, 2009) about a fifty year old college professor who develops early onset Alzheimer ’s Disease.  The book has become better known since a movie by the same title based on it was released last year with Julianne Moore winning a Best Actress Oscar for her portrayal of the title character.

I have not seen the film, but I did enjoy reading the book.  Anyone who has had a loved one suffer with this disease (as my mother did) will find much with which he can relate.  I would also commend it to ministers to help them understand and care for those who suffer with this disease, other forms of dementia, or any cognitive impairment, and their families.

One interesting scene reminded me of how such trials raise spiritual questions even in those who live otherwise secular lives.   When Alice is coming to terms with the diagnosis, she makes a few feeble attempts to ask spiritual questions about her condition.  While out for a walk she enters an Episcopal church near her home and sits down in a pew from where she sees a banner which reads, “GOD IS OUR REFUGE AND STRENGTH, A VERY PRESENT HELP IN TROUBLE.”

The narrator then describes:

She couldn’t be in more trouble and wanted so much to ask for help.  But she felt like a trespasser, undeserving, unfaithful.  Who was she to ask for help from a God she wasn’t sure she believed in, in a church she knew nothing about?
She closed her eyes, listening to the calming, oceanlike waves of distant traffic, and tried to open her mind.  She couldn’t say how long she sat in the velvet-cushioned pews in that cold, darkened church, waiting for an answer.  It didn’t come. She stayed longer, hoping a priest or parishioner would wander in and ask her why she was there.  Now, she had her explanation.  But no one came (p. 98).

This reminded me that we have opportunities to evangelize and minister to persons who are facing trials, including the trial of Alzheimer’s Disease.