Report on Reformed Baptist Brethren and the Nepal Earthquake

I got this email news report today from Pastor Boon-Sing Poh of the Damansara Reformed Baptist Church in Kuala Lampur, Malaysia, regarding the recent massive earthquake in Nepal and its impact on some Reformed Baptist churches there:

Our long-time friend Pastor Samuel Rai of Canaan Baptist Church, Pokhara, has sent in his initial report on the earthquake of 25 April 2015. His congregation was in worship when the ground shook for about five minutes. The people were shaken by the experience, although there was no damage to the building. They were even more shaken to hear, later, of the devastation in other parts of Nepal. Five districts were most affected, viz. Gorkha, Nuwakot, Kathmandu, Kavre, and Sindhupalchowk. The epicentre of the earthquake was at Barpak in Gorkha district, causing the worst devastation there. The death toll has exceeded 3,500 while the injured has exceeded 7,000. A number of affected areas have not been reached, due to distance, isolation, and damaged roads. Communication is slowly being restored.

The government of this poor country was totally unprepared for such a major disaster, despite the many warnings given by seismologists before that. Major earthquakes of magnitudes 8.5, 6.7 and 6.8 were recorded in the years 1932, 1988, 2013, and now in 2015 it is of 7.9 magnitude. There is no modern machinery to rescue those trapped under buildings nor equipment to detect others under the rubble.

The news has come in that many Christians throughout Nepal died while they were worshipping, crushed by the collapsed buildings or by the stampede of the panicking people. Nepal is a predominantly Hindu nation such that Christians worship on Saturday, Sunday being a working day. The survivors have to witnessed the death of loved ones and the destruction of their houses and cattle. To make matters worse, there is a shortage of food, water, and proper sanitation. Most of the people are staying out in the open fields, stricken with fear and not knowing what to do.

Samuel Rai has dispatched teams of people to villages that are affected to do rescue and relief work, especially to Gorkha and Dhading near Kathmandu. Samuel Rai has five churches there, while other churches are linked to Canaan Baptist Church in Pokhara in some ways. The church in Richet, where Samuel Rai also runs a Bible School, is totally destroyed. Of the 127 families of about 500 people in the church, 261 persons were killed. Pastor Man Bahadur Tamang is seriously injured, while his wife and daughter are dead. A team of helpers is on the way there, but transportation is a problem. At Gorkha Barpak, which was the epicentre of the earthquake, 90% of the houses and all the churches were destroyed. Some 210 people were found dead, while many are still missing. Some 32 pastors in this area were trained under the Bible Education by Extension (BEE) programme run by Canaan Baptist Church, Pokhara. Samuel Rai has dispatched a team there, led by Pastor Chhetra Baramu.

Together with other churches, Pastor Samuel is arranging for emergency needs to be brought to the affected areas - food, medicine, blankets, tents, water supply, etc. Funds collected will be wholly channeled to these needs. Samuel Rai asks for prayer that the Lord will open many hearts to the gospel and comfort the churches that are faced with such a tremendous challenge at this time.

There is also a page on the Gospel Highway website of the Reformed Baptist Churches of Malaysia that allows you to contribute to the "Nepal Earthquake Fund."

These photos accompanied the news report above: 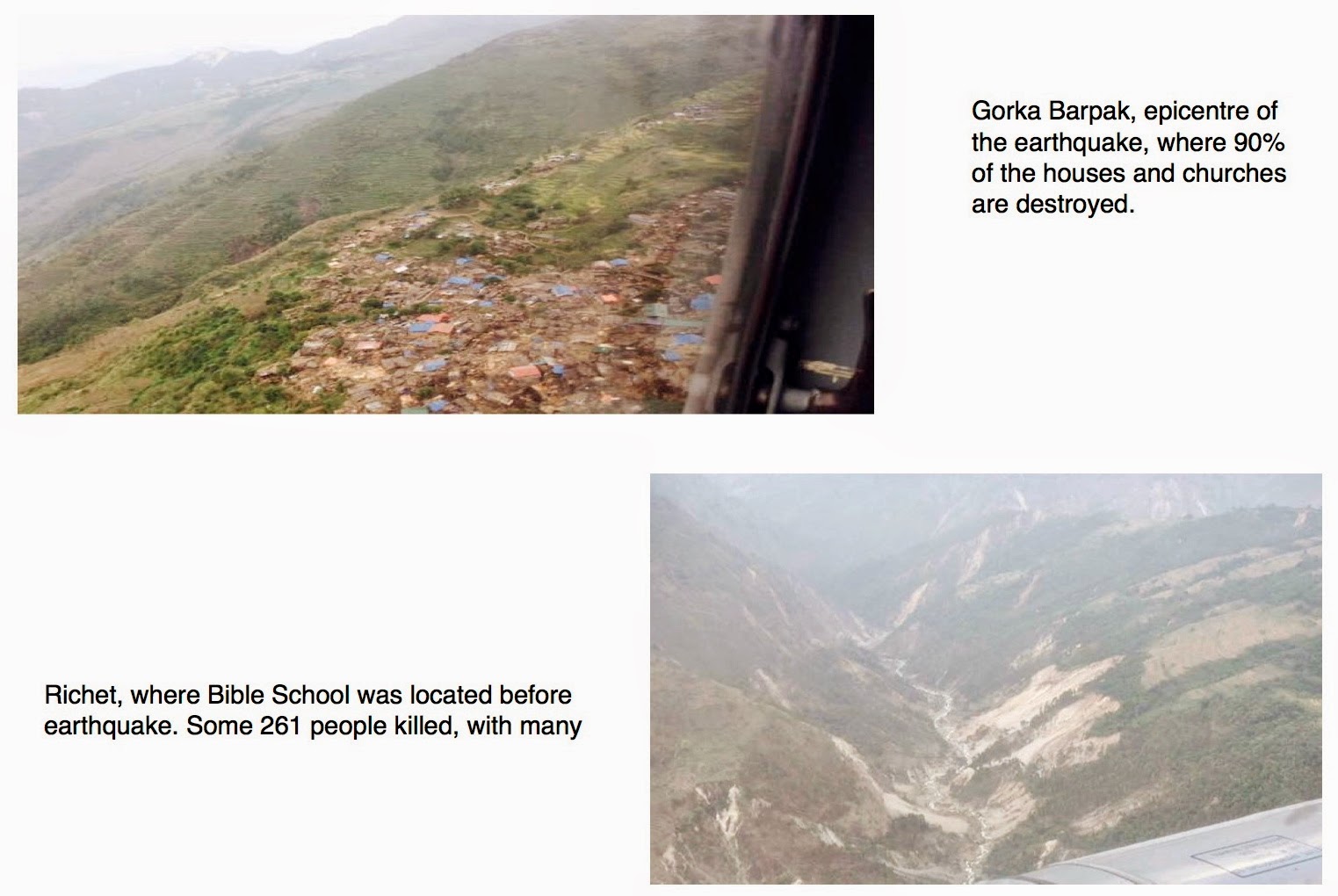 I got another report and another way to contribute through the Met Tab. http://confessingbaptist.com/report-on-reformed-baptist-brethren-affected-by-nepal-earthquake-how-you-can-help/