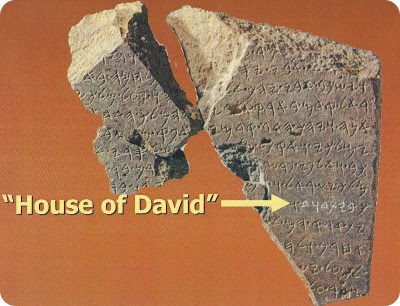 Image:  The 9th century Aramaic Tel Dan Stele, discovered in the early 1990s, is one of the earliest references outside of the Bible to the dynasty established by King David in ancient Israel.

Note: Here are some sermon notes from the exposition of 2 Samuel 12:13 from last Sunday morning’s message:

“And David said unto Nathan, I have sinned against the LORD. And Nathan said unto David, The LORD also hath put away thy sin; thou shalt not die” (2 Samuel 12:13).

Over lunch on a recent Sunday at CRBC we had a lively discussion about David.  Several said, “You know Pastor, this study of 2 Samuel is making me feel as though I don’t like David very much.  How could he be called a man after God’s own heart?”  One person pointed out, however, that, unlike Saul, David responded to God’s rebukes with genuine repentance.

It is hard to over-estimate how important v. 13 is to 2 Samuel 12.  It is the hinge or the axis upon which everything turns.  It says so much in so few words.

We have in this brief single verse both David’s repentance and God’s forgiveness.

How will David respond to Nathan’s parable and this rebuke?  Will he say to his men, “Off with Nathan’s head!”  No, it is a mark of David’s spiritual authenticity, his spiritual life, that he says to Nathan, “I have sinned against the LORD.”  Perhaps David said more.  Indeed, if we turn to Psalm 51 we have an entire psalm dedicated to David’s repentance (see especially the inspired title and the sentiment in v. 4 which echoes the words here:  “Against thee, thee only, have I sinned, and done this evil in thy sight….).  Note that David’s saying he has sinned against God does not mean he denies that he has also sinned against men.  But he recognizes that however great the horizontal aspect of his sin, the greater sin was the vertical.

From a human perspective we cannot judge men’s hearts.  We do not know if repentance is genuine and evangelical or mere natural remorse, the tears of a child whose hand is caught in the cookie jar and who is only sorry his deeds were exposed.  Paul called this the difference between “godly sorrow” and “the sorrow of the world” (2 Corinthians 7:10).

But the next line in v. 13 gives us the divine verdict on David’s repentance:  “And Nathan said unto David, The LORD also hath put away thy sin; thou shalt not die” (v. 13b).  Notice:

1.  The response to David’s repentance is immediate and unconditional.  The Lord does not say:  Well, David, “If you shape up and fly right, then I’ll forgive you.”  Or, “If you say three Hail Mary’s and four Our Fathers then I will grant the sacrament of reconciliation.”  Nathan simply announces a divine declaration of sovereign forgiveness.  Kings can forgive the transgressions of their servant subjects.

2.  It says the LORD put away (abar:  pass over, carry away, take away)  David’s sin.  Where did that sin go?  We have to go to the NT revelation to know the answer. It was laid upon Christ our sin-bearer, who not only became the means of God’s expiation of sin but also his propitiation of sin.  Compare:

1 John 4:10 Herein is love, not that we loved God, but that he loved us, and sent his Son to be the propitiation for our sins.