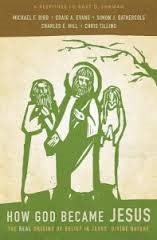 Image:  The Craig Bird edited book which responds to Ehrman. 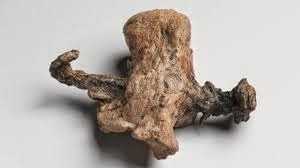 Image:  The Yehohanan ossuary, discovered in 1968 in Israel, shows the remains of a man who had been crucified with a nail still embedded in his heel.  The ossuary dates to c. 20 AD, showing that the Romans did allow the burial of the victims of crucifixion.
I've posted a new episode (# 23) of Word Magazine.  This one includes part 2 of my review of the NPR Fresh Air Interview with Bart Ehrman on his new book, How Jesus Became God (HarperOne, 2014).  In the review I make reference to the Craig Bird edited response to Ehrman's book, How God Became Jesus:  A Response to Bart D. Ehrman (Zondervan, 2014).  I called attention in particular to chapter 4 ("Getting the Burial Traditions and Evidence Right") by Craig A. Evans which IMHO completely demolishes Erhman's arguments against the Gospel accounts of the burial and empty tomb.  Evans notes Roman and Jewish literary evidence showing that the Romans permitted burial of the victims of crucifixion.  He also points to archaeological evidence, including tombs and ossuaries with the remains of those crucified (including the Yehohanan ossuary).