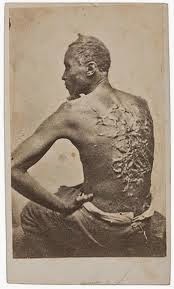 Image:  A pre-Civil War slave showing the scars from his whippings for running away.  When Paul wrote that he bore in his body "the marks of the Lord Jesus" (Gal 6:17), perhaps he meant the scars of the beatings he received including five times having received 39 lashes (2 Cor 11:24).
Note:  Here are some notes reflecting on the ministry of the apostle Paul from last Sunday morning’s sermon on Galatians 6:11-18.


It has been said that next to the Lord Jesus himself, the most important person in the New Testament and in early Christianity was the apostle Paul.


My guess is that if we met Paul in the flesh we probably would not be all that impressed with his outward appearance.  We do not have an authoritative physical description of Paul in the NT though there is one that appears in a late, extra-biblical book, which probably isn’t historically reliable.  At any rate it describes Paul as “a man short in stature, with a bald head, bowed legs, in good condition, eyebrows that met, a fairly large nose, and full of grace.”  It adds, “At times he seemed human, at other times he looked like an angel” (from The Acts of Thecla, in B. Ehrman, Lost Scriptures, p. 114).


I say that we probably would not have been very impressed with him based on Paul’s own account of what his opponents (false teachers) said about him:


2 Corinthians 10:10 For his letters, say they, are weighty and powerful; but his bodily presence is weak, and his speech contemptible.

Here in Galatians 6 we have two personal windows into the ministry of Paul.

First, in v. 11, Paul says:  “Ye see how large a letter [or with how large letters] I have written unto you in my own hand.”

This tells us at least three important things:

First, it tell us about the importance of the authority and integrity of God’s Word and that it came through the hand of God’s own chosen apostles.

There were false teachers who attempted to write forged letters in Paul’s name.  See 2 Thessalonians 2:2 where Paul warns them “not to be shaken in mind, or be troubled, neither by spirit, nor by word, nor by letter as from us.”  Also in 2 Thessalonians 3:14 he warns against those who do not obey his epistle telling the believer to note that man and not to keep company with him, so that he might be ashamed.  This point to two equal and opposite errors:  (1) those who set up a false authority in place of the authentic Scriptures; and (2) those who deny or reject what the Scriptures plainly teach.

Galatians 6:11 reminds us to listen to God’s Word, because it comes to us from his chosen prophets and apostles, like Paul.  Compare:

Jude 1:17 But, beloved, remember ye the words which were spoken before of the apostles of our Lord Jesus Christ;

Second, it hints at the personal physical sufferings and hardships that the apostle Paul had endured on behalf of Christ and on behalf of God’s people.  It is possible that Paul had to use a secretary to write this final greeting with large letters because his eyesight had failed and he was suffering with some form of significant vision impairment (note:  eyeglasses were not invented until 1284 AD in Northern Italy; see Rodney Stark, The Victory of Reason, pp. 43-44).  Compare Galatians 4:15 where Paul says that in better days the Galatians had such affection for him they would have plucked out their eyes and given them to him.  Perhaps this was the thorn in the flesh that Paul wrote of in 2 Corinthians 12 which he said God had given him to buffet him lest he should be exalted beyond measure (v. 7) and which he three times prayed for it to be removed (v. 8) but God’s answer was to let it remain:

2 Corinthians 12:9 And he said unto me, My grace is sufficient for thee: for my strength is made perfect in weakness. Most gladly therefore will I rather glory in my infirmities, that the power of Christ may rest upon me.

Third, Paul lays down a model which teaches us that Christian ministry is personal.  It is not a faith of form letters, or impersonal emails, or phone-it-in ministry, or of Pastors who do not know your name.  The man can barely see, but he picks up the pen to write.  This is a mark of authenticity but also of care for the Galatians.

The second window comes in v. 17.  Paul begins, “From henceforth let no man trouble me [literally:  let no one add to me hardships or troubles]…”  This implies that these false teachers had been troubling Paul.  They had likely been defaming him, mocking him, slandering him, and challenging his status as an apostle.  This is why he had so vigorously defended his apostleship (see 1:11-16).  But these things had been a burden to him.  They had been trouble to him.  No doubt this was true because of the spiritual burden he had for the people of God.

He continues:  “for I bear in my body the marks [stigmata] of the Lord Jesus.” By stigmata here Paul does not means the same five cross wounds of Jesus, as came to be held in mystical Catholicism, but simply to the scars and scrapes that had accumulated on his body throughout his missionary journeys.  In 2 Corinthians 11:22-30 Paul provides a catalogue of his sufferings for Christ, including many beatings (cf., for example, v. 24:  “Of the Jews five times received I forty stripes save one.”).  I thought of those old photographs of slaves in the pre-war South who had been whipped so many times that their backs were scarred from their beatings.  I imagine Paul’s back looked like that.  Paul saw this as his badge of authenticity, as his resume or letter of recommendation.  His sufferings as an apostle proved him to be an authentic apostle of the Suffering Servant, the Lord Jesus Christ.  Compare when he wrote:

Colossians 1:24 I now rejoice in my sufferings for you, and fill up in my flesh what is lacking in the afflictions of Christ, for the sake of His body, which is the church

The unimpressiveness of Paul ought to give us pause as we consider what it is that makes men great.  In the kingdom men are great who deny themselves, take up their cross daily, and follow Christ (cf. Luke 9:23).

Third, Paul lays down a model which teaches us that Christian ministry is personal. It is not a faith of form letters, or impersonal emails, or phone-it-in ministry, or of Pastors who do not know your name. The man can barely see, but he picks up the pen to write. This is a mark of authenticity but also of care for the Galatians.

You ought to put this on a billboard size missive and show it to every single Christian minister in the world. I think about one in a hundered get it; the rest either refuse it, deny it or pretend it doesn't exist. Others don't know, but I hope they'll find out.

I read your book review of Austin Fischer, Young, Restless, No Longer Reformed: Black Holes, Love, And A Journey In And Out Of Calvinism, and you are not an easy read.

Although I haven't read the volume in question and have no plans to do so, I learned a lot from your review. In particular the never ending arguments about a loving, benevolent and just Lord as compared to man's expectations were well received by my mother's favorite son, who has been forced to endure many such in casual conversation with others as well as inside my own (thick) head.

Your conclusion citing your experience in the field is interesting to me and explains a lot about your character.

I think the title might be a reference to The Young and the Restless, a TV soap opera of 41 tiresome seasons which is still in production.

Lord bless you and keep up the good work!

Thanks for your comments. Glad you thought these sentiments on ministry were on target.

Sorry the Fischer review wasn't clearer. I think you're right not to bother with reading this one.

And you're right about the ultimate source of the Y & R reference. Colin Hansen borrowed it for his 2008 title and now Fischer for his. There is a bit of a soap opera quality to it....