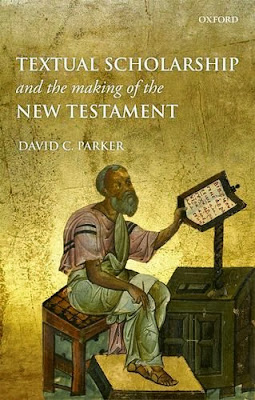 I uploaded a new WordMagazine today.  This episode is the fifth and final in a series of reviews of Dan Wallace’s article, Inspiration, Preservation, and New Testament Textual Criticism.


Here are a few sources I cited in the review:


First, Wallace argued that “the doctrine of preservation was not a doctrine of the ancient church,” noting that it was not articulated until the Westminster Confession.


In response I cited Richard A. Muller’s observation in Post-Reformation Reformed Dogmatics, Volume 2:  “The church fathers devoted virtually all their theological energies to the exposition of the central issues in that body of doctrine—Trinity, Christology,  soteriology.  Whereas a high view of Scripture is implied in al their efforts, the development of an explicit doctrine of Scripture was, like the problem of theological prolegomena, left to later ages, specifically to the high scholastic era of the Middle Ages and to the Reformation and post-Reformation eras” (p. 6).  The point is that the fact that the doctrine of preservation was not explicitly articulated until the Westminster Confession, does not mean it was not a view held by early Christians and by the Church Fathers.


Second, I spent the final part of this episode noting four points.  These are drawn from David C. Parker, perhaps the leading academic NT scholar in the world today,  in his recent book Textual Scholarship and the Making of the New Testament (Oxford University Press, 2012) based on the 2011 Lyell Lectures at Oxford:


1.  Modern academic text criticism has abandoned the quest for the original autograph:


“…the modern concept of a single authoritative ‘original’ text was a hopeless anachronism, foisting on early Christianity something that can only exist as a result of modern concepts of textual production” (p. 24).


“The New Testament philologist’s task is not to recover an original text, not only because we cannot at present know on philological grounds what the original text might have been, nor even because there may have been several forms to the tradition, but because philology is not able to make pronouncements as to whether or not there was such an authorial text” (pp. 26-27).


2.  The Westcott-Hort Theory is outdated and inadequate:


On the conclusion that the “Neutral” text is superior to the Byzantine based on thirteen examples:  “… this is a totally inadequate amount of evidence, even if we grant their examples are only intended to be exemplary.  They did not have the evidential base to substantiate their claim that there is not one contrary example of the conflation found in the Byzantine text” (p. 82).


On the winsome presentation of the Westcott-Hort theory which based its critical text on the superiority of Sinaiticus and Vaticanus:  “It is confident and convincing.  It has been accepted by most people for a long time.  And yet we are left—or should be left—with the feeling that the theory does not deserve the reverence which has been accorded it” (p. 83).


He adds:  “Nevertheless, the time has come to abandon it [the Westcott-Hort proposal] completely, not because it was wrong, but because we can do better” (p. 83).


3.  The “geographical argument” should be rejected as a test for superiority:


“The geographical range of a reading may show its age or its popularity, but it will not demonstrate its superiority” (p. 80).


Note:  This quote applies in particular to Wallace’s argument that the traditional text is suspect because it was not dominant in Egypt.


4.  The application of text type theories from the Gospels to the rest of the NT is inappropriate:


“It is quite strange that NT philology drew up a concept of text types based upon the Gospels, and then assumed that it applied to the entire corpus of writings, even though it has always been widely acknowledged that the text types of the Gospels could not be shown to exist in other parts of the NT.  Thus we have worked with a very incomplete and unproven system, and in effect tried to reconstruct the oldest recoverable form of the writings without having a sound methodology for doing so” (pp. 161-162, n. 31).


Note:  This quote contradicts Wallace’s claim in the article that there is no majority text for the Pauline letters until the ninth century.  Wallace does precisely what Parker challenges:  He applies text types drawn from the Gospels to the rest of the NT (namely, the Pauline corpus).
Posted by Jeffrey T. Riddle at 1:35 PM

You make a good point concerning preservation. There was a time when all we needed was the Apostles Creed. But when the Arian Heresy arose, the Church had to update the Ancient Creed at the Council of Nicea to clarify what the Church already held. This is also a good argument for Church Creeds, Covenants, and Confessions.

David Parker seems to be an honest unbeliever. This is the logical conclusion to adopting a skeptical (unbelieving) view of the written Word by using Naturalistic Theory rather than trusting in the providential preservation of God. Our forefathers adopted the 1689 Confession because it was in those days that scholars began to doubt God's hand in preserving Scripture. It was there that the first rock began to fall, but Parker seems to be ushering in the last phase of the Avalanche. I wonder if these "Shepherds" will be able to lead the sheep off of the cliff?