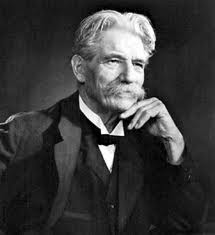 Albert Schweitzer (1875-1965) was a modern day renaissance man.  He made his mark in no less than three fields:  as a New Testament scholar who wrote the definitive The Quest of the Historical Jesus (German original Von Reimarus zu Wrede); as a musician, organist, and organ builder who wrote a valuable study on the life of Bach; and as a humanitarian physician who set up a hospital and became a “jungle doctor” in Africa based on his “reverence for life” ethic.


I’ve been doing some reading in Schweitzer to prepare for the “Life and Teachings of Jesus” course I’ll be teaching next semester.


In Out of My Life and Thought, Schweitzer reviews his influential work on “life of Jesus” research.  He is well known for his critique of the lives of Jesus produced by ninteenth century Protestant liberalism and his contrasting eschatological presentation of Jesus.  Though Schweitzer had no sympathy for the non-eschatological Jesus of liberalism, this does not mean he was favorable towards orthodox Christology.


According to Schweitzer, the historical Jesus erred in announcing the imminent coming of the Kingdom of God.  Thus, Jesus was “capable of error” (p. 57).  Furthermore, Schweitzer argues that we are not acting “in the spirit of Jesus if we attempt with hazardous and sophisticated explanations to force [his] sayings into agreement with the dogmatic teaching of His absolute and universal incapability of error” (p. 57).


Schweitzer adds that the historical Jesus never made any claims to omniscience and he “moves us deeply by His subordination to God.  In this He stands out as greater than the Christ personality of dogma which, in compliance with the claims of Greek metaphysics, is conceived as omniscient and incapable of error” (p. 57).


Schweitzer makes clear that although his analysis of the historical Jesus undermines the liberal Protestant view of a this-worldly Jesus, this does not mean that it supports orthodox or dogmatic presentations of Jesus.  Nor does it mean that he supports the notion that Jesus himself taught dogmatically.  He notes, instead, that the historical Jesus “does not think dogmatically.  He formulates no doctrine.  He is far from judging any man’s belief by reference to any standard of dogmatic correctness” (p. 58).  According to Schweitzer, Jesus taught “the religion of love” which has been “freed from any dogmatism” (p. 58).  This “religion of Jesus” may now become “a living force in our thought, as its purely spiritual and ethical nature demands” (p. 59).  While expressing “reverence” and “thankfulness” for the faith of “ecclesiastical Christianity” handed down “in Greek dogma and kept alive by piety” he unilaterally rejects it (p. 59).  What matters in Christianity is not adherence to “articles of belief” but devotion to “Jesus’ religion of love” (p. 59).  Thus, “If the Church has the spirit of Jesus, there is room in her for every form of Christian piety, even for that which claims unrestricted liberty” (p. 59).


At the least, one might say that Schweitzer attempted to put his theology into practice.  At age 30 he began his medical studies in preparation to go to Africa as a physician.  He applied to a French mission agency to go as a “missionary” to Africa, but questions were rightly raised about his unorthodox theology.  Schweitzer describes orthodox missionary efforts as holding to a faith “in the fetters of dogmatism” (p. 95).  When the mission agency invited him to appear before a committee to be examined as to his beliefs, Schweitzer notes, “I could not agree to this, and based my refusal on the fact that Jesus, when He called His disciples, required from them nothing beyond the will to follow him” (p. 115).  He offered instead to meet individually with the committee members to explain his beliefs.  In the end, they agreed to send him with the understanding he would only serve as a physician and would do no preaching or teaching [an understanding, by the way, which he reneged upon after reaching the field and began to accept invitations to preach; see p. 143].  Schweitzer notes that one member of the committee sent in his resignation upon the agency’s acceptance of this compromise (p. 116).
What, in the end, did Schweitzer teach about Jesus?  For Schweitzer, Jesus was an ordinary yet extraordinary man who wrongly expected the imminent end of the ages.  He was not God but made his mark in his radical subordination to God.  Thus, like most historical-critical scholars of his era, Schweitzer held to an essentially “Arian” view of Jesus.  These convictions naturally led to his rejection of pre-critical, orthodox, confessional views of Jesus.  Though he offered a stinging critique of the liberal lives of Jesus of his age, in the end, Schweitzer advocated an equally murky Jesus who called for an amorphous “religion of love.”
Posted by Jeffrey T. Riddle at 10:41 AM