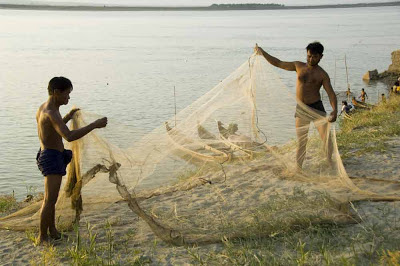 Note:  This is another post in an ongoing series on Biblical evangelism.  For an archive of past posts, click the "Evangelism Series" label below.
In 1773 when Thomas Boston was only 22 years old he wrote a classic little book on evangelism titled The Art of Man Fishing.  It is a meditation on Matthew 4:19 wherein Jesus says to Peter and Andrew, “Follow me and I will make you fishers of men.”  I used some quotes from Boston in last Sunday’s sermon on the Lukan parallel passage (Luke 5:1-11).


Boston wrote in a time of declension in the churches of Scotland when the gospel ministry had been neglected by many.  His book presents what we might call an “old school” approach to evangelism (as yet untainted by revivalistic notions).  He sees Biblical evangelism as primarily accomplished through the ministry of the Lord’s servants as they preach the gospel “in the public assemblies of the Lord’s people” and in “private conference.”


In a chapter titled “Ministers are Fishers by Office” Boston presents ten ways in which ministers are like “fishers.”  Here is an abbreviated summary:


They are catchers of the souls of men, set “to open the eyes of the blind, and to turn them from darkness to light, and from the power of Satan unto God.”  Preachers of the gospel are fishers, and their work and that of fishers agree in several things.


The design and work of fishers is to catch fish.  This is the work that preachers of the gospel have taken in hand, even to endeavor to bring souls to Christ…..


Their work is a hard work; they are exposed to much cold in the water.  So is the minister’s work.


A storm that will afright others, they will venture on, that they may not lose their fish.  So should preachers of the gospel do.


Fishers catch fish with a net.  So preachers have a net to catch souls with.  This is the everlasting gospel, the word of peace and reconciliation wherewith sinners are caught.


It is compared to a net wherewith fishers catch fish, first, because it is spread out, ready to catch all that will come into it, Isa. 40:1:  “Ho, every one that thirsteth, come ye to the waters; and he that hath no money, come ye, buy and eat; yea, come, buy wine and milk, without money, and without price.”  God excludes none from the benefits of the gospel that will not exclude themselves; it is free to all.


Second, because fish are taken unexpectedly by the net, so sinners by the gospel….


Third, as fish sometime come near and touch the net, and yet draw back; so many souls are somewhat affected by the hearing of the gospel yet remain in the gall of bitterness and the bond of iniquity….


Fourth, some fish that have been taken fast hold enough by the net, struggle, and get out again.  So some souls have convictions, and may seem to get caught; but yet alas! they stifle all their convictions, stay in the place of the breaking forth…..


Fifth, all that are taken in the net do make some struggling to get free….


Sixth, yet this struggling will not do with those which the net hold fast enough…..  Indeed God does not convert men to himself against their will, he does not force the soul to receive Christ; but he conquers the will, and it becomes obedient.  He that was unwilling before, is then willing.  O the power of grace!


Seventh, in a net there are many meshes in which the fish are caught.  Such are the invitations made to sinners in the gospel, the sweet promises made to them that will come to Christ…..


Eighth, lest the net be lifted up with the water, and so not fit for taking fish, and the fish slight it and pass under it; there are some pieces of lead put to it to hold it in the water….  So….there must be used some legal terrors and law-threatenings to drive the fish into the net.


Ninth, the meshes must not be over-wide, lest the fish run through it.  So neither must doctrine be general, without particular application, lest thou be no fisher of men…..


Tenth, neither must they be too neat and fine, curiously wrought, lest they hold out the fish….


Fishers observe in what places they should cast their nets, and where they may expect fish….  There are two pools wherein the net should be set:  in the public assemblies of the Lord’s people….  The second place the net is to be set is in private conference…..
Posted by Jeffrey T. Riddle at 9:26 AM