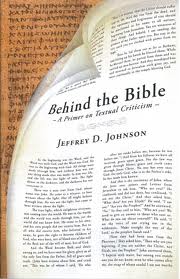 Behind the Bible is a booklet written by Jeffrey D. Johnson, pastor of Grace Bible Church in Conway, Arkansas which provides a popular overview and introduction to text critical study of the New Testament.  Perhaps a better title would be Behind the New Testament, since the book does not address the text of the Old Testament.  An introduction is provided by Dr. Richard Belcher and a back cover endorsement by apologist James White.


Content:
After the forward by Belcher, the book consists of five chapters:
In chapter one, “A Need for Textual Criticism,” Johnson notes the necessity for some grasp of text critical issues given the modern proliferation of English translations.
Chapter two, “Paleography,” is devoted to “the art and science of dating ancient literature” (p. 25).  A survey is provided of the writing materials used in the production of Biblical texts.
In chapter three, “Textual Faithfulness,” reviews the various “textual families” proposed by modern text criticism.
Chapter four, “Methods of Textual Criticism,” suggests that there have been two fundamental approaches to text criticism:  (1) the documentary method (using one text as the basis); and (2) eclecticism (using many texts as the basis).
In chapter five, “The History of the Greek Text,” the author provides a survey of various editions of the New Testament from ancient to modern times.
The book concludes with a brief appendix (pp. 109-111), “Answering Bart Ehrman.”
Analysis:
The importance of text criticism for the modern church is indeed a significant issue, and I commend Pastor Johnson for addressing this topic in a popular format.  I found the most engaging parts of the book to be the review of the ancient materials and text-making process.  I also appreciated Pastor Johnson’s efforts to provide a survey of modern scholarship that resulted in the modern critical text.
In the end, however, the booklet has some serious shortcomings. I will address these under two headings:  (1) methodological issues; and (2) factual and editorial issues.
First, methodological issues:  Johnson uncritically assumes, without ever proving or demonstrating, the validity of the modern critical text as the best basis for English Bible translations for evangelical Christians.  He assumes, for example, that the goal of text criticism is the recovery of the original “autographs,” and assures the reader that with the modern text we can come “very, very close” in a manner that “does not alter any truth of doctrine” (pp. 19-20).  He assumes various aspects of modern text criticism and passes these along as fact without sufficient discussion, proof, or source citation.
Perhaps most significantly, Johnson does not interact with alternative proposals for understanding text criticism, especially as they have been presented in conservative and Reformed circles.  He does not address the confessional (Westminster and Second London Baptist) Reformed doctrine of the providential preservation of the Scriptures through the apographa (copies).  There is also no discussion of the Majority text championed by Farstad, Hodges, and Pickering or the Byzantine text championed by Robinson.  Johnson also makes no reference to the current seismic shifts that have taken place in contemporary, post-modern, academic New Testament textual criticism which have essentially resulted in the abandonment of  the old “modern” attempts to reconstruct the “original autograph” in favor of a construal of a diversity of “living texts” (D. C. Parker), or how evangelicals might respond to these shifts.  The author appears to have relied on a very limited number of sources.  The factual material in the book appears to be especially dependent on summarizing Harold Greenlee’s Introduction to New Testament Text Criticism, which, though it has been released in a revised edition, was first published in 1964.
Second, factual and editorial issues:  In general, I believe this book might be greatly strengthened if it provided more source documentation for the factual material that it presents.  I ran across a number of statements that appeared to be speculative, confused, or erroneous.  Here are some examples:
1.       On p. 37:  “It is uncertain whether the uncial or minuscule style was used in autographs of the New Testament.  Many scholars believe that Paul’s epistles, as personal letters, were written in minuscule.”
The chart on p. 47, however, points out that the minuscule script was not introduced until the 9th century, replacing the uncial scripts of the earlier centuries.  What scholars believe Paul’s letters were written in minuscule in the original hand?
2.       On pp. 61-62:  “None of the early church Fathers quoted from the Byzantine text.”
This statement is not factually accurate.  In fact, Johnson himself refers to the work of Harry Sturz on these same pages (footnote 29), who has pointed to Byzantine quotations in the Church Fathers.
3.      On p. 76:  “The first NT book to be written was the epistle of James.”
Though some scholars, Study Bibles, etc. make this suggestion, it remains an unproven and speculative suggestion, not a fact.  No argument is put forward for this assertion or footnote provided for an authoritative source to support this claim.
4.       On p. 78:  The assertion is made that the Gospel of Luke and the book of Acts were “transmitted and dispersed together throughout the church in one scroll or codex.”
Again, no source is cited for this assertion.  It is a speculation.  Though Luke and Acts share common Lukan authorship, they are, of course, canonically separated by the Gospel of John.


5.       On p. 92:  “The first scripture quotation from a Byzantine text is found in the writings of Chrysostom.”
This is inaccurate.  See again comments above on pp. 61-62.
6.       On p. 92:  “…the Byzantine text was likely the byproduct of the fifty Bibles published by Eusebius for the church at Constantinople in AD 331.”
No source is provided for this assertion. It is an unproven speculation.  In fact, in Codex Sinaiticus:  The World’s Oldest Bible, D. C. Parker suggest that Sinaiticus (hardly a Byzantine text) might have been one of the de luxe Bibles ordered by Constantine.


7.       On p. 105:  Johnson says of Westcott and Hort’s Greek NT:  “Their edition of the Greek text is the basis for the Revised Standard Version.”
Rather than the RSV of 1946/1952 I assume he meant to say the English Revised Version of 1881.
8.       On pp. 106-107, Johnson suggests that the “United Bible Societies” are responsible for both the Nestle-Aland and the UBS modern critical Greek texts of the NT.
Though the contemporary editions of these texts do agree and there is cooperation between the organizations that publish them, this reference confuses the fact that the Nestle-Aland 27th ed. is produced by the German Bible Society (Deutche Bibelgesellschaft).
In addition to addressing factual problems like those cited above, this book would also profit from some editorial revision.  Though it is brief, there are unnecessary repetitions.  The Ehrman appendix is not adequately developed and might just as well be dropped.  The booklet would be improved if it provided more footnotes and a detailed bibliography.  There are also some writing errors that might be corrected if it is ever reprinted.  For example, the title of Harold Greenlee’s book on p. 22, n. 11 is cited as “Introduction to the New Testament Textual Criticism.”  The “the” should be omitted.  The chapter headings are also confused from chapter 3 forward (sic “chapter 2” p. 53; “chapter 3” p. 66; “chapter 4” p. 75).
Conclusion:
As noted earlier, text criticism is an issue of emerging significance among traditional and Reformed Christians.  The proliferation of modern translations has led many to ponder not merely the translation philosophy that undergirds such translations but also the original language texts upon which they are based.  Unfortunately, Johnson’s work does not demonstrate a firm and reliable grasp of all the historical, factual, and doctrinal issues that are involved in textual study of the New Testament.