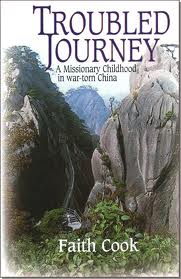 Note:  In last Sunday afternoon's message, I made reference to Faith Cook's Troubled Journey.  Here's the review of the book I wrote a few years ago.


Faith Cook is a pastor’s wife in England and a gifted author who has produced several useful Christian biographies.  In this brief work, she traces her own memories of growing up as a child of missionary parents to China during the Second World War.  In so doing, Cook writes appreciatively and respectfully about the sacrifices of her parents and other missionaries for the cause of Christ, but she also offers an honest critique of some of the negative consequences this meant for her family and others.  Cook makes this plain from the outset noting in the Preface that “sometimes their zeal was misguided” (p. ix).


Cook’s parents, Stanley and Norah Rowe, served with the China Inland Mission, founded by Hudson Taylor.  She explains that it was Taylor who “had established the regulation that the wives of missionaries should also be missionaries in their own right” (p. 19).  This policy meant “that the married women were expected to give their time principally to their missionary endeavor, and therefore would find little or no opportunity to provide for the educational needs of their children” (pp. 19-20).  Based on a widely held application of Matthew 10:37 which states that disciples are not to place love of family members above loyalty to Christ, many missionaries sacrificed family life for their missionary service.  Cook explains, “Taken in isolation from other Biblical teaching on the responsibilities of family life, these words were used as a rationale for the long separations between children and parents, not only on mission fields, but also in Christian work in the home countries” (p. 20).


As her family served in remote corners of China, Cook explains how they faced various serious illnesses and deprivations, how her infant brother died with dysentery and her mother suffered afterwards with depression, and how her parents’ devotion to ministry often meant that she was left unsupervised and neglected.  She notes, “Many were the ugly sights and sounds that I inadvertently witnessed and heard” as she wandered idle about the village where they lived (p. 28).  Cook also describes the experience of being sent to boarding schools where the treatment of children was not always sensitive and caring.  She sometimes went for years without seeing her siblings and parents.  She also describes the traumatic emergency evacuation of her school from China to India on Christmas Day 1944 on an American DC-3.  She then relates how her family was forced to leave China under communist pressure in the post-war years.


Upon their return to England, the family suffered the tragic loss of another of Cook’s younger brothers in a road accident. Though she expresses respect for her parent’s faith and courage in the loss of their son, she also notes, “In later years, however, I came to see that such fortitude, though admirable, could also act as a cloak for their sorrows and delay that inner healing through faith so needful to them” (p. 95).  She shares a letter that Dr. Martin Lloyd-Jones, their pastor, sent her parents at that time:  “As we would expect from you, your letter is full of triumphant faith.  But we are not meant to be unnatural, and you are bound to feel the loss and the absence of such a bright spirit very keenly” (p. 95).  Not long, in fact, after this great loss, her parents decided to leave Cook and her older brother in boarding schools in England and return to mission service in Malaysia. She notes that her father’s commitment to mission work “was all consuming:  at times almost obsessive in character” (p. 97).  She adds that to understand her parent’s decision one must realize “the ethos in which it was made.  An immense value was placed on this sort of sacrifice by the Christian community in general and it was viewed as honourable and highly commendable” (p. 97).  She reflects:  “These men and women felt they were offering up to their God their ‘Isaacs’—their most valued possession—as indeed they were; but sadly, the question they did not address was whether God required such sacrifices” (pp. 97-98).


As Cook completes the story of her childhood, she relates the long distance letter writing relationship and infrequent contact she had with her parents throughout her teenage and college years.  She notes that her “unsettled childhood, sheltered school environment, and now the loss of any stable home base” left her “ill-prepared for the cold realities of the adult world” (p. 112).  Despite the hardships, however, Cook also points to the Lord’s gracious provision throughout the experience.  She went on to marry, to become a pastor’s wife, and to raise her own family.  In the conclusion, Cook reflects:  “It had indeed been a troubled journey for both my brother and me, but as I look back over the path I have traveled, I can see now see that despite the undoubted sufferings through which we had both passed—unnecessary sufferings in many respects— God has supported, protected, and added unexpected provisions for our needs along the way.  Even the sufferings themselves have proved to be part of God’s design for my life” (p. 116).


This book would be an excellent gift for the children of missionaries and pastors who might have misgivings about the circumstances of their upbringing.  In fact, it would likely be helpful for anyone who has painful childhood memories.  It would also be an excellent read for those parents now serving in ministry, as they consider the impact their decisions will have upon their families.  Cook’s tone is both respectful and honest.  She rightly challenges the Hudson Taylor inspired view of family sacrifice on the mission field.  There is no reason to believe that the Lord brings the call to mission service and the call to family discipleship into conflict where one must be sacrificed for the other.  Cook also reveals that the real key to resolution of hurtful things from the past is a firm belief in the providential sovereignty and goodness of God.