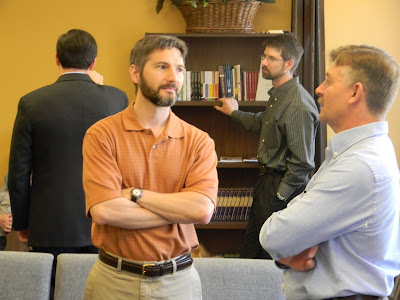 Image:  Fellowship at CRBC after morning worship last Lord's Day (May 15, 2011)
Note: Our current Lord’s Day morning sermon series at CRBC is on the life of Saul (1 Samuel 8-15). Below are my notes from the conclusions of last Sunday’s message on “The Anointing of Saul” (1 Samuel 9-11).
What Saul failed to do in the office of king, Christ has perfectly accomplished for his people.
Why did the Lord allow the office of king to be established in Israel? He did so to prepare for the coming of the Messiah, the anointed one.
There are both similarities and great differences between Saul and Christ:
Saul comes from the tribe of Benjamin, the smallest of the tribes of Israel (1 Sam 9:21). Christ will come from the tribe of Judah, but he will be born in Bethlehem, “little among the thousands of Judah” (Micah 5:2).
Saul was a “choice young man” who stood head and shoulder above his peers (1 Sam 9:2). Christ had “no form nor comeliness, and when we shall see him, there is no beauty that we should desire him” (Isa 53:2).
Saul seeks lost donkeys (1 Sam 9:3). Christ will come to seek the lost sheep of the house of Israel (Matt 15:24).
Saul was appointed by God to save his people out of the hand of the Philistines (1 Sam 9:16). Christ was appointed by God to save his people from their sins (Matt 1:21).
Saul was invited to commune at the table of Samuel (1 Sam 9:25). Christ will invite his disciples to commune with him at the Lord’s table (Luke 22:19; Rev 3:20).
Saul was anointed with oil by Samuel (1 Sam 10:1). Christ was baptized in the Jordan by John and the Holy Spirit descended upon him like a dove (Matt 3:16).
When the moment came for Saul’s appointment to the kingly task, he hid himself “among the stuff” (1 Sam 10:22). When Christ’s moment came to take on his kingly task, though all his disciples deserted him, he manfully stood his ground and offered up his life a ransom for many (Mark 10:45; 14:50).
When Saul was appointed king, scoffers derided him, “How shall this man save us?” (1 Sam 10:27). When Christ went to the cross, men derided him, mocking, “He saved other; himself he cannot save” (Mark 15:31).
Saul established his kingship by defeating Nahash the Ammonite, but he left many other foes for Israel to face (1 Sam 11). Christ proved his kingship by offering up himself, once for all, a perfect atoning sacrifice for sin and defeated the world, the flesh, death, and the devil (Rom 6:10; 1 Cor 15:55-57).
Everything that Saul could not accomplish, Christ did. Everything Saul was not, Christ is.
Grace and truth, Pastor Jeff Riddle
Posted by Jeffrey T. Riddle at 4:56 PM

What a sad story the story of Saul is. What a warning to all.... the Spirit of God came on him, and yet He did not live in him.
Poor, poor, Saul. And praise God for our King who - as you say - was able to accomplish all this sinner was not...