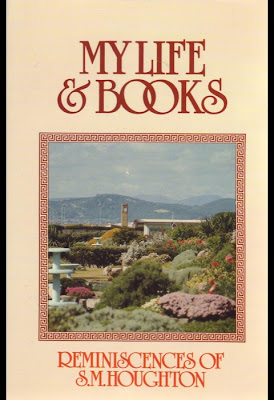 I just finished reading My Life and Books: Reminiscences of S. M. Houghton (Banner of Truth, 1988): 173 pp. The book has three parts: (1) Houghton’s autobiographical reflections (pp. -139; these ten chapters originally appeared as articles in the Banner of Truth magazine); (2) reflections on Houghton by Iain Murray (pp. 140-162); and (3) a description of Houghton’s final days and death by his pastor at the time, Richard Chester (pp. 163-165).
Who was S. M. Houghton (1899-1987)? Houghton was one of those men who served quietly and mostly behind the scenes in kingdom work, but who had a significant and lasting impact. By profession he was a history teacher and librarian in a Welsh Grammar School. Raised in a Methodist home and even pursuing the Methodist ministry, he did not hear and believe the gospel till he was a young adult through the witness of Strict Baptists (best chapter title: chapter two: “The Early End of Ministerial Career in Methodism”). Houghton was a bibliophile and collector of Puritan works who amassed a personal library that numbered in the tens of thousands of volumes (c. 30,000). At one point he had to store part of his library in two chicken sheds in his yard! When he retired from teaching in 1960 he began work as an editor and proofreader for the Banner of Truth Trust. Among the many Banner works that Houghton helped prepare for publication and (re)introduce to evangelical circles: Merle d’Aubigne’s The Reformation in England, C. H. Spurgeon’s Autobiography, Arnold Dallimore’s Life of George Whitefield, John Calvin’s Sermons on Ephesians, and D. M. Lloyd-Jones’ Romans commentaries. Houghton also served as editor of the Bible League Quarterly from 1963-1986 and helped re-organize the Bible League Trust in the early 1980s. He was a staunch defender of the Authorized Version of the Bible.
Here are three spiritual gleanings from this work:
1. The power and allure of good books. Houghton was the consummate bibliophile. He worked to collect and preserve the literary labors of some of the great men of the past. Among the best parts of this work are his descriptions of finding rare Puritan works everywhere from second hand bookshops to garbage piles and his reverential descriptions of the personal impact of these books. This memoir shows the power of the written word.
2. The wise use of retirement. In some ways Houghton’s most significant kingdom contributions came in the last 27 years of his life, post-retirement.
3. The influence of thankless “behind the scenes” labor. Houghton did a lot of the grunt work that resulted in the contemporary revival of interest in Puritanism. He did not choose the titles Banner reprinted. He did the detailed work of editing, proofreading, and fact checking these books. He did not speak in large conference and was, by all accounts, a quiet, reserved, and private man. Stop and think, however, of the long time impact of his labors. How many read those books and discovered Reformed theology (the Biblical gospel)? How many pastors, for example, have consulted Lloyd-Jones while preaching through Romans?
JTR
Posted by Jeffrey T. Riddle at 9:08 AM

I was taught at Rhyl Grammar School by Mr. Houghton 1934-41, Once a week I visited his home and we played three games of chess on each occasion. He was a quietly spoken very graceful man, contemplative, erudite. In keeping with his temperament he played a steady, conservative game. I still have records of many of our games which I used to write out at home. [Grattan Endicott OBE]