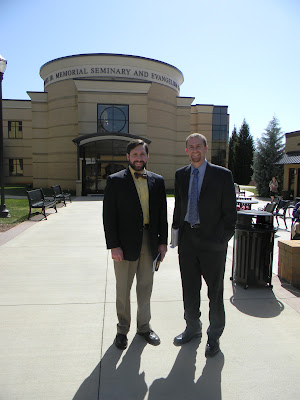 Image:  Daniel and Kerry in front of the BJU Seminary
Daniel H. and I are here in Greenville, SC to attend the Spring Theology Conference at Greenville Presbyterian Seminary.
This morning we went over to Bob Jones University to meet Kerry M., brother of CRBC's Greg and a grad student in the seminary and pulpit speech instructor at BJU.  Kerry took us on a tour of the school including a stop at the library where they have a reproduction of the "Jerusalem Chamber" (place where the AV was translated).
We then sat in on a homiletics lecture at the seminary by Dr. Mark Mennick.  Mennick's lecture was on the Puritans and preaching.  It was excellent.  He noted that the greatness of the Puritans centers on four factors:
1.  They were scholars.
2. They were preachers.
3.  They were persecuted.
4.  They were writers.
At the beginning of the lecture, Minnick passed out copies of some Puritan books from his personal library for the students to see.  They included John Owen's exposition of Psalm 130, a sermon by Jeremiah Burroughs, and Benjamin Keach's A Golden Mine Opened or The Glory of God's Rich Grace (1694).  At the back of this book there is a personal account of a former owner recording his impressions of hearing George Whitefield preach!
After class we headed over to the 11 am BJU Chapel, compulsory for all students, faculty, and staff.  The auditorium was filled with c. 5,000 people.  Pastor Minnick happened to be the speaker for chapel also.  He preached a solid message on Hebrews 3:12:  "Take heed, brethren, lest there be in any of you an evil heart of unbelief, in departing from the living God."
We had lunch with Kerry, then it was over to register for the conference and make the first session at 1:00 pm.
More photos: 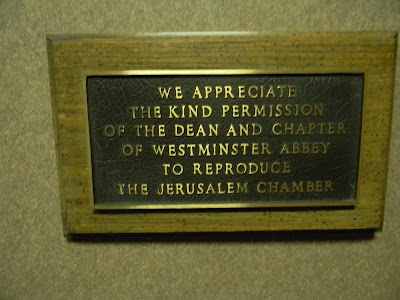 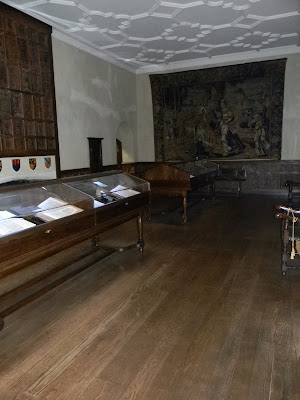 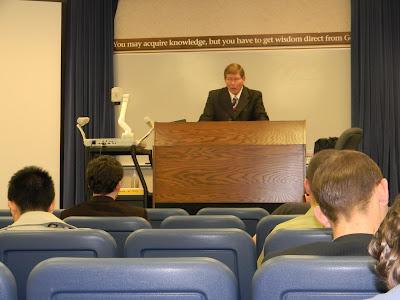 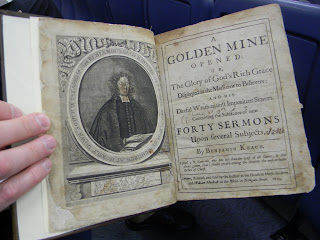 Image:  Original edition of Benjamin Keach's "A Golden Mine Opened." 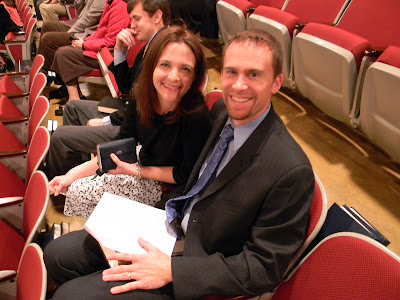 Pastor Riddle, I am afraid that I quickly broke the Tenth commandment after you mentioned first editions of Benjamin Keach, John Owen, and Jeremiah Burroughs. First editions of books like that are the best additions to any library, and when the original owner records his thoughts on hearing George Whitefield in the back... now I am really coveting Dr. Mennick's books! I look forward to hearing your thoughts on the Greenville Seminary, especially on Dr. Morecraft.