The Directory for the Publick Worship of God: Part 14 of 16 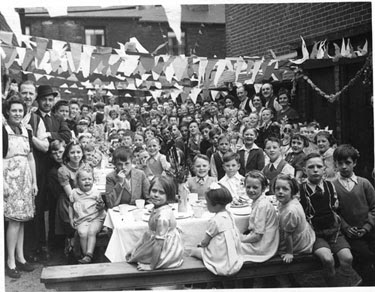 WHEN any such day is to be kept, let notice be given of it, and of the occasion thereof, some convenient time before, that the people may the better prepare themselves thereunto.
The day being come, and the congregation (after private preparations) being assembled, the minister is to begin with a word of exhortation, to stir up the people to the duty for which they are met, and with a short prayer for God's assistance and blessing, (as at other conventions for publick worship,) according to the particular occasion of their meeting.
Let him then make some pithy narration of the deliverance obtained, or mercy received, or of whatever hath occasioned that assembling of the congregation, that all may better understand it, or be minded of it, and more affected with it.
And, because singing of psalms is of all other the most proper ordinance for expressing of joy and thanksgiving, let some pertinent psalm or psalms be sung for that purpose, before or after the reading of some portion of the word suitable to the present business.
Then let the minister, who is to preach, proceed to further exhortation and prayer before his sermon, with special reference to the present work: after which, let him preach upon some text of Scripture pertinent to the occasion.
The sermon ended, let him not only pray, as at other times after preaching is directed, with remembrance of the necessities of the Church, King, and State, (if before the sermon they were omitted,) but enlarge himself in due and solemn thanksgiving for former mercies and deliverances; but more especially for that which at the present calls them together to give thanks: with humble petition for the continuance and renewing of God's wonted mercies, as need shall be, and for sanctifying grace to make a right use thereof. And so, having sung another psalm, suitable to the mercy, let him dismiss the congregation with a blessing, that they may have some convenient time for their repast and refreshing.
But the minister (before their dismission) is solemnly to admonish them to beware of all excess and riot, tending to gluttony or drunkenness, and much more of these sins themselves, in their eating and refreshing; and to take care that their mirth and rejoicing be not carnal, but spiritual, which may make God's praise to be glorious, and themselves humble and sober; and that both their feeding and rejoicing may render them more cheerful and enlarged, further to celebrate his praises in the midst of the congregation, when they return unto it in the remaining part of that day.
When the congregation shall be again assembled, the like course in praying, reading, preaching, singing of psalms, and offering up of more praise and thanksgiving, that is before directed for the morning, is to be renewed and continued, so far as the time will give leave.
At one or both of the publick meetings that day, a collection is to be made for the poor, (and in the like manner upon the day of publick humiliation,) that their loins may bless us, and rejoice the more with us. And the people are to be exhorted, at the end of the latter meeting, to spend the residue of that day in holy duties, and testifications of Christian love and charity one towards another, and of rejoicing more and more in the Lord; as becometh those who make the joy of the Lord their strength.
Comment and analysis: If there are times that call for solemn fasting and sobriety, there are also times that call for public celebration and thanksgiving to God. This is another public duty of the church. The minister provides a “pithy narration of the deliverance obtained.” The service includes prayer, the singing of appropriate psalms, and preaching. Notice that at the service’s end, the minister is to exhort the people to avoid “excess and riot.” Days of thanksgiving are not excuses for gluttony and drunkenness. The mirth and rejoicing is to be “ not carnal, but spiritual.” The poor are also to be remembered with alms. What occasions would merit such days? End of drought or famine? End of war or political turmoil? Discovery of cure for disease?
Posted by Jeffrey T. Riddle at 8:46 AM