A Visit to the French Protestant (Huguenot) Church in Charleston 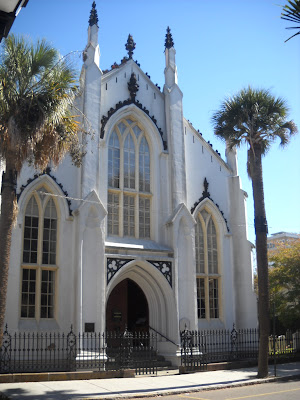 Image:  Exterior of the French Protestant (Huguenot) Church in Charleston, SC.
Charleston, SC is called the "Holy City" due to the high concentration of historic churches in the downtown area.  Last Monday, we walked to about seven different church buildings all within roughly a mile's span.
One of my favorite sites was the French Protestant (Huguenot) Church on the corner of Queen and Church Streets.  In April of 1680 forty-five French Protestants who has escaped persecution in their homeland and immigrated to England came to Charleston. They soon founded their own church.  The current building was completed in 1845 and the church is now the only existing Huguenot congregation in America.
The congregation worshipped exclusively in French until 1828 when a seven member committee translated the Huguenot Liturgy into English.  They had to add a burial service to their litrugy since under French Catholic oppression  Protestants had to conduct their burial services at night and in silence.  The church closed and reopened several times in its history.  The current pastor (a former Southern Baptist) has served since 1982 and now services are primarily in English.  The church still holds one service in French each year in the spring (on a date near the anniversary of the Edict of Nantes, April 13, 1598).  They also hold a solemn service each year on or near October 18 to commemorate the revocation of the Edict of Nantes in 1685.  Our tour guide (an Englishman!) is a member who told us the church was still distinctly Calvinistic in theology.  He also said that they have a "collation" (covered dish meal) each Sunday following the morning service.  This proves they're Reformed!  The first song sung in each Lord's Day service is Psalm 68 in French, and the last hymn sung is "My Country 'Tis of Thee."
Sadly, the church has lost a good bit of its Protestant simplicity with an elaborate organ, memorial plaques, and chandeliers added in later years.  Here are some more pictures: 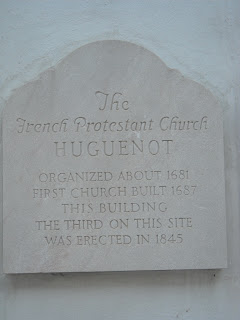 Image:  Plaque outside the church 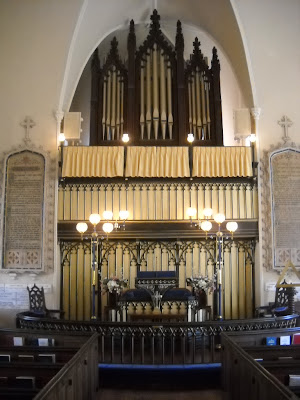 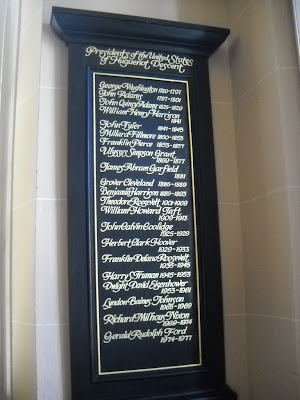 Image: The narthex holds this list of American Presidents of Huguenot descent.  A plaque inside the church notes George Washington's financial gifts to the congregation. 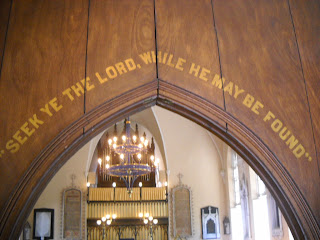 Image: Over the Entrance to the sanctuary:  "Seek ye the Lord, while he may be found" 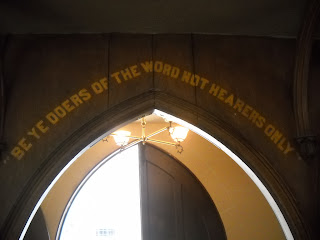 Image:  And over the exit:  "Be ye doers of the word not hearers only"
JTR
Posted by Jeffrey T. Riddle at 12:39 PM

I visited this church in 2010 as well. Loved the worship service and the people. However, the pastor is not Reformed, and the church is more of an ecumenical/liturgical church even though they have the French theological creeds; why would a baptist trained pastor head up the church? All in all, it's great to have a Huguenot Church in the US. The Reformed Theology needs to be taught to strengthen the people and feed them God's word in the tradition from which they are descended.