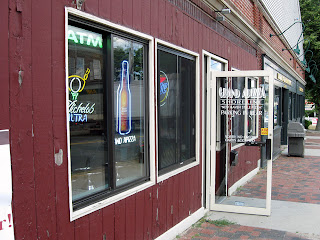 Photo:  Grand Apizza storefront in Clinton, Connecticut
There was an interesting story on NPR this morning about a family in Connecticut that has been told by the state department of labor that they are breaking child labor laws by having their children work in their family pizza business.
Here is part of the story:
Owner Mike Nuzzo says he grew up working in the pizza trade with his dad.
"He taught me more than any college or university in this country could teach me," Nuzzo says. "He taught me about family, respect, integrity and hard work. And that's what I'm trying to teach my children."
Not long ago, Nuzzo began letting his 13-year-old son help out in the kitchen on Friday nights.

"He can make a pizza, dress a pizza," Nuzzo says of his son. "He brings the pizza to the counter, says thank you to people ... knows how to count money."

The two younger children worked with their mom seating customers and busing tables. Their grandfather often joined them.

But that came to an abrupt end in May, after Connecticut's Department of Labor was tipped off that kids under age16 were working at the pizzeria. Officials told the family it had to stop.

Nuzzo says he was stunned.

"Friday nights we have three generations of family working together, and that's a memory," he says. "I got a little choked up. It's a tradition. It's a memory for my son to work with his grandfather and myself."
You can listen to the whole story here.
This incident raises lots of issues.  For starters, why did someone feel compelled to "tip off" the authorities?  Recently we were at a soccer field for one of our children's games and someone felt compelled to call the police because a child from another family on the team was playing alone (but within view) of her parents at a nearby playground.  When did this vigilante reporting on other people's parenting become the norm?  If you see real abuse, sure, report it.  If you see a family working together in a family business, why in the world would you feel compelled to phone is a "tip"?  More to the point, why does the state want to involve itself in how a family chooses to teach its children about running their family business?  In a sense what they have been doing is homeschooling (Small Business 101) their children.  Sure, if someone is forcing children to work in a sweat shop, chaining them to sewing machines, maybe the state should get invovled.  But for this????
JTR
Posted by Jeffrey T. Riddle at 1:04 PM

They better high tail it to every family farm in their state to stop the kids from helping out in the fields.