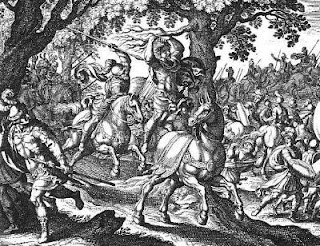 In outward appearance he is an impressive man. “From the sole of his foot to the crown of his head there was no blemish in him” (2 Sam 14:25). At his annual haircut, his sheared locks were weighed at two hundred shekels (2 Sam 14:26)!  Looks, however, can be deceiving. Embittered by the mistreatment of his sister Tamar, he murdered his brother Ammon. He tries to take the reins of justice and authority out of rightful hands and into his own. Both the cause and the means are unjust. Despite the leniency David extended to Absalom after his treachery, Absalom sets out to undermine the authority of his father and king. He despises the fifth commandment. He does so by sowing discord among the Israelites and casting doubt on his father’s decision. The rebellious son sets himself up as an alternative ruler and judge. “So Absalom stole the hearts of the men of Israel” (2 Sam 15:6). Perhaps David was thinking of his rebellious son and his mob when he wrote in Psalm 35:12:  "They rewarded me evil for good to the spoiling of my soul."  Absalom dies in disgrace, his swelled head with its flowing locks caught in the branches of a terebinth tree (2 Sam 18:9, 14-15).

Thanks for the comment. It's been a while since I wrote this. I don't recall why I said "sold" rather than "weighed." Maybe I got it from a commentary or just from the notion of the shekel being a unit of both measurement and money. Anyhow, your comment will lead me to edit it, so there's less confusion. Again thanks!