Reflections of a Recovering Southern Baptist 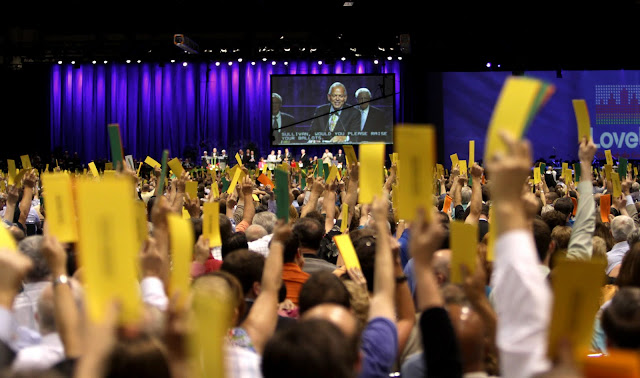 Photo:  SBC Messengers vote on the "Great Commission Resurgence Task Force" Report with President Johnny Hunt presiding on the big screen.
I grew up in Southern Baptist churches, was a Royal Ambassador, did Bible Drills, gave to Lottie Moon, attended a Southern Baptist seminary, served as a Journeyman missionary with the Foreign Mission Board (now International Mission Board), and then spent 18 years in ministry in two SBC churches. As a Pastor, I often interpreted SBC church life to folk from non-SBC backgrounds who came to the congregations I served. I facilitated a good number of Presbyterians, independent Baptists, and non-denominational types into becoming Southern Baptists (or at least joining the church I was serving). I attended denominational meetings and tried to keep abreast of the latest happenings. Now I am part of an independent, Reformed Baptist church plant and, for the first time in my life, I am not involved in a Southern Baptist church. A friend of mine recently asked how it felt to be out of SBC circles. My answer: liberating.
I was reminded of that this week as I watched online some of the annual SBC meeting in Orlando (you can view the archives here). I didn’t even realize they were meeting this week until I read a blog article about this year’s big issue, the Great Commission Resurgence Task Force Report (the key issue seems to restructuring SBC agencies and allowing the IMB to operate in the USA and Canada, much to the chagrin of the NAMB, who previously held exclusive “rights” to these areas—Doesn’t that sound absurd?).
After watching some of the proceedings I was struck by several things:
For one thing, you see the denominational machine at work. Don't get me wrong.  I support the whole idea of churches being denominated as Baptist, Presbyterian, etc., but where is such an organization as this mentioned in Scripture?
For another, you see the zaniness of conducting “democratic” processes with 10,000 plus “messengers” when, in fact, most decisions are made behind the scenes. It also reminded me of the programmatic view of ministry and the unbiblical “democratic” church “business meetings” I have seen firsthand in SBC churches.
For another, you see the Finney-esque evangelistic showmanship. Wade Burleson posted a devastatingly on target critique of the “invitation” that was held on the last night of the meeting with “evangelist” Tony Nolan and the Christian rock group “Casting Crowns” (if you like this group, you really ought to ask why they support Nolan and invited him to be their “speaker” on their most recent “tour”—OK maybe putting things in quotes gets redundant, but it’s hard to overcome the irony of the terms).
Finally, I was really struck by the denominational hubris and triumphalism expressed by outgoing SBC Executive Committee President Morris Chapman in his report. He boldly stated, “I believe that our convention is the last hope for a great spiritual awakening.” This sort of view was also expressed in discussion of the Great Commission Resurgence Task Force. The sense seems to be that if Southern Baptists don’t pursue evangelism and missions in North America (and the world) then God isn’t going to be able to accomplish very much. Poor little god.
I know that there are those who are encouraged because they feel that evangelical Calvinism is on the rise in the SBC. Al Mohler was right there in the thick of it with the Great Commission Resurgence Task Force. Perhaps God will move and reform will happen but hopes for this now appear to me to be naïve. Yes, I am grateful for many things I gained from experiences in SBC circles and there are many good things happening in some SBC churches and institutions. I thank God for that. But, again, how do I personally feel about now being outside those circles? Liberated.
JTR
Posted by Jeffrey T. Riddle at 2:56 PM

As a former Southern Baptist, I'm delighted to report that it is, indeed, liberating to be out of that toxic denomination once and for all. The religious arrogance, misogyny, and overall hypocrisy of the SBC is spiritually damaging in so many ways. Leaving the SBC is the best thing I ever did for my soul.

Sounds like we might have different takes on what's wrong with the SBC and why it's liberating to be apart from it, but thanks for your comment.