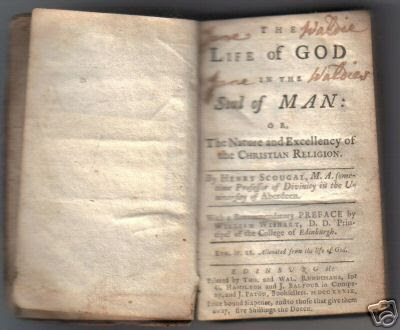 Christ's Constant Devotion
"And when He had sent them away, He departed to the mountain to pray" (Mark 6:46).
Last Sunday I mentioned that I have been reading Henry Scougal’s little devotional classic, The Life of God in the Soul of Man. Scougal was one of those men who lived his life well, even though he did not his live life long. He died June 13, 1678 when he was not yet twenty-eight years old.
In the first part of The Life of God in the Soul of Man, Scougal reflects on the life and example of Christ. Here is one his reflections on Christ’s prayer life:
Another instance of his love to God was, his delight in conversing with him by prayer, which made him frequently retire himself from the world, and with great devotion and pleasure spend whole nights in that heavenly exercise, though he had no sins to confess, and but few secular interests to pray for; which alas!, are almost the only things that are wont to drive us to our devotions; nay, we may say his whole life was a kind of prayer; a constant course of communion with God: if the sacrifice was not always offering, yet was the fire alive: nor was ever the blessed Jesus surprised with that dullness, or tepidity of spirit, which we must many times wrestle with, before we can be fit for the exercise of devotion.
May we also learn from Christ how to make our lives one of constant prayer.
Grace and peace, Pastor Jeff Riddle
Note: I am writing this morning (Wednesday) from Blacksburg, Virginia where I am traveling with Pastor Conrad Mbewe. Last night, he spoke to a group of students at the Graduate Life Center at Virginia Tech at an event sponsored by Ekklesia Church, a sister SBCV congregation. Pray for God to use that message to speak to the hearts of those who received it.
Note: Evangel article 10.7.09.
Posted by Jeffrey T. Riddle at 9:49 AM