Dagg on Ministers of the Word as "A Distinct Class" 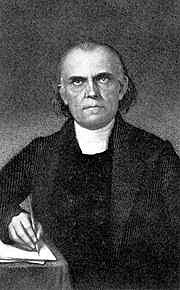 Photo: This picture of J. L. Dagg is more than a little intimidating. His eyes look like they could pierce your soul! The image no doubt reflects the sobriety that was expected of ministers in Dagg's day.

Here begins a new series from John Dagg's Manual of Theology (The Southern Baptist Publication Society, 1858). Dagg was born in Loudon County, Virginia in 1794 and died in 1884 at over ninety years of age. He was one of the few early Baptists in America to write systematically on doctrine. His influential Manual of Theology had two parts: A Treatise on Christian Doctrine and A Treatise on Church Order.
I will offer selections from "Chapter VIII: The Ministry" from A Treatise on Church Order, along with some analysis at the end.

CHAPTER VIII
THE MINISTRY
SECTION I.--MINISTRY OF THE WORD
The ministers of Christ are a separate class of persons, distinguished by a special divine call to preach the word.
A DISTINCT CLASS
The ministers of Christ are, like ordinary Christians, separate from the world. They are partakers of the heavenly calling, by which men are brought out of the world, and made the servants of Christ. In all his epistles to the churches, Paul claims to be a fellow-saint with them, a member of the same spiritual family, and an heir of the same heavenly inheritance. Throughout the Scriptures, the ministers of Christ are spoken of as persons who love Christ, and are from the heart devoting themselves to his service. They must therefore be of the number who are "called to be saints."
The ministers of Christ are also separate from ordinary Christians. They are one with ordinary Christians, as being called in one hope of their calling; but, besides the call to repentance and faith, which they have received in common with their brethren, they have been called to special service in the Lord's cause. It is clear, from the Holy Scriptures, that there were, among the first Christians, persons to whom the work of the ministry was specially intrusted. Paul says, concerning these, God "hath given to us the ministry of reconciliation"(2 Cor 5:8). "Giving no offence, that the ministry be not blamed"(2 Cor 6:3). "Who hath made us able ministers of the new testament"(2 Cor 3:6). He speaks of himself, as counted faithful; and put "into the ministry"(1 Tim 1:12); and of the special grace given to him, that he should preach among the gentiles the unsearchable riches of Christ (Eph 3:8). The bestowment by the Holy Spirit of special qualifications for special service in the Lord's cause, is plainly taught in 1 Cor. xii., and Eph. iv. The inquiry, "Are all apostles? are all prophets?"(1 Cor 12:29) &c., shows that the offices designated did not belong to the whole body of the saints.
The separation of the ministry from the mass of ordinary Christians, is not like the separation of Christians from the world. In the latter case, they cease to be of the world, and become strangers and pilgrims in the earth. But men who enter the ministry, do not cease to be saints. Saul and Barnabas were separated unto the work to which the Holy Ghost had called them; but this separation did not take from them a place among the saints and faithful in Christ Jesus. John speaks, concerning the whole company of the saints: "We are of God; and the whole world lieth in wickedness"(1 John 5:19). Here is a strong line of division, like that which separates land and water. But the ministry appears, among the people of God, like the mountains on a continent, forming a part of it, and closely united with surrounding lands. Eminent spiritual gifts distinguish the ministers; but the same spirit that actuates them, pervades the whole body of Christ. All the disciples of Christ are bound, according to their ability, to advance the cause of- their Master, and labor for the illumination and salvation of men: and the diversity of talent among the ordinary disciples, may be compared to the diversity of hill and valley in the ordinary face of the country. But ministers are distinguished, by their superior qualifications for service, from the ordinary mass of Christians, like mountains rising above the common undulations of the surrounding landscape.
The special qualifications which the Holy Spirit bestows, bind him on whom they are bestowed to use them in the service of Christ. They are given to fit him for this service, and they constitute a divine call for him to engage in it. They are not given to confer a privilege merely, but they are a solemn call to duty--a call demanding the service of the whole life.
The apostles, when called by Christ, immediately left their secular employments, and gave themselves ever afterwards to the service of their Lord. Paul, when called, conferred not with flesh and blood. The work of the ministry did not cease, when these holy men left the earth; but other persons have been fitted to carry it on, by the same Spirit that qualified them for the peculiar service. He bestows his gifts "for the perfecting of the saints, for the work of the ministry, for the edifying of the body of Christ, till we all come in the unity of the faith, and of the knowledge of the Son of God, unto a perfect man, unto the measure of the stature of the fullness of Christ" (Eph 4:12, 13).
The ministers of Christ are not a separate class of men in such a sense as to constitute them an organized society. They are fellow-laborers in the Lord's service, but have no power over one another; and have no authority from Christ to combine themselves into an ecclesiastical judicatory to exercise power in any manner. They are all on a level as brethren; are the servants of Christ, and the servants of the churches.
Analysis: Dagg will offer a typical Baptistic two-fold view of office ([1] pastors who are gospel ministers and [2] deacons). He begins with the gospel minister as "a distinct class of persons, distinguished by a special divine call to preach the word." Their call and service are parallel to that of the apostles who "immediately left their secular employments and gave themselves everafter to the service of the Lord." In the final paragraph, Dagg rejects the Presbyterian view of gospel ministers forming "an organized society" or "ecclesiastical judicatory" (presbytery) outside the local church to which they are subject.
JTR
Posted by Jeffrey T. Riddle at 1:58 PM