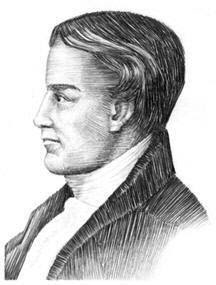 From Andrew Bonar’s biography of M’Cheyne (Banner of Truth, [1844] 1960):
"He used to rise at six on the Sabbath mornin’, and go to bed at twelve at night, for he said he (liked) to have the whole day alone with God."
When asked if he was afraid of "running short of sermons" he replied, "No; I am just an interpreter of Scripture in my sermons; and when the Bible runs dry, then I shall."
"At Kelso, some will long remember his remarks in visiting a little girl, to whom he said, ‘Christ gives last knocks. When your heart becomes hard and careless, then fear lest Christ may have given a last knock.’"
"He used to say, ‘Ministers are but the pole; it is to the brazen serpent you are to look."
"In his letters are expressions such as these: ‘I often pray, Lord, make me as holy as a pardoned sinner can be made.’"
"He used himself to say, ‘Live so as to be missed;’ and none saw the tears that were shed over his death would have doubted that his own life had been what he recommended to others. He had not completed more than twenty-nine years when God took him."
JTR
Posted by Jeffrey T. Riddle at 9:31 PM