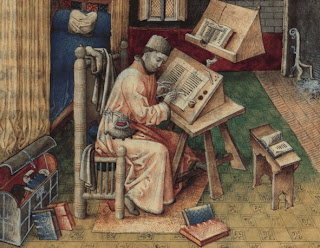 This occasional, verse by verse exposition of Jude began last year. You can read previous posts under the label "Jude Exposition" below.
Yet Michael the archangel, in contending with the devil, when he disputed about the body of Moses, dared not bring against him a reviling accusation, but said, "The Lord rebuke you!" (Jude 1:9 NKJV).
This is one of the most disputed verses in the book of Jude. The author is continuing the theme of warning against false teachers. He is presenting an example for the faithful to follow in contending with these evil men.
The verse is noteworthy for the mention of Michael (the name in Hebrew means, "Who is like God?"). He is an "archangel." This implies that there is some ordering of the angels. Michael is mentioned in the book of Daniel as "one of the chief princes" (see Daniel 10:13, 21; 12:1). In Revelation 12:7 there is a description of "war in heaven" between "Michael and his angels" and "the dragon and his angels." Jude 1:6 mentions rebellious angels "who did not keep their proper domain." Michael is apparently numbered with those who gladly accept their domain and faithfully serve the Lord. We get some limited insights here into the created order of angels, but we should be careful not to speculate or go "beyond what is written" (1 Corinthians 4:6). Our focus is on the Lord and not angels (cf. Revelation 19:10; 22:9).
This verse is also noteworthy for its allusion to an event that has no explicit description in Scripture. The reference is to some dispute in the spiritual realm between Michael (God’s messenger) and the devil after the death of Moses (i. e., "when he disputed about the body of Moses"). There is a reference to such a conflict in an extra-Biblical Jewish work titled The Assumption of Moses.
This is where dispute over this verse arises. Some have attacked Jude’s place in the canon for this reference. This is misguided. The Biblical writers often make use of references and illustrations from books outside the Bible. In Acts 17:28 and Titus 1:12, for example, Paul quotes the pagan poet Epimenides. In making use of uninspired writings the Biblical authors are not vouching for the validity of those works. They are simply using them to make their inspired points.
Jude’s desire is to illustrate the proper attitude of the faithful in responding to false teachers. Even Michael when confronting as diabolical a figure as the devil himself, did not denounce him in his own power. Instead, he made his appeal to a sovereign God, saying, "The Lord rebuke you!" When we face false teachers, we should trust the Lord of all the earth to do right in the end. He will rebuke those who oppose him.
Application: