A Visit to the Union Seminary Cemetery at Hampden-Sydney 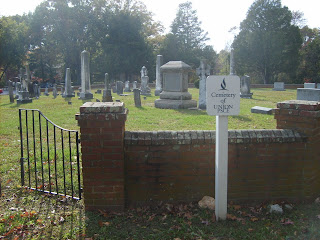 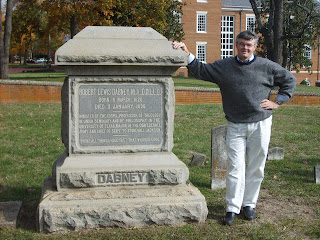 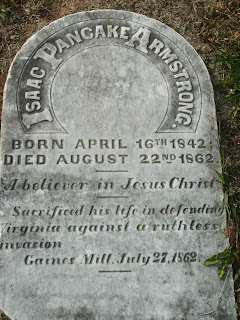 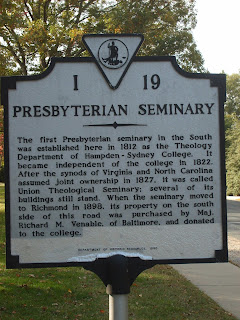 Last Thursday Marcus Deel and I made a trip to Farmville, Virginia to visit a JPBC student at Longwood. Afterwards we made the short trip over to Hampden-Sydney College and visited the cemetery of Union Seminary on that rural campus. The historical marker notes Union as the oldest Presbyterian Seminary in the South having begun in Hampden-Sydney's Theology Department in 1812. The seminary moved to Richmond in 1898. It has since also moved far from its Southern Presbyterian and Reformed heritage.
Among the noteworthy tombstones is that of Robert Lewis Dabney (1820-98).
Also interesting is the grave marker for 20 year old Isaac Pancake Armstrong (1842-62), "A believer in Jesus Christ, Sacrificed his life defending Virginia against a ruthless invasion, July 27, 1862."
For more photos, look here.
JTR
Posted by Jeffrey T. Riddle at 5:07 PM

Isaac Pancake Armstrong was the son of Edward McCarty Armstrong, Sr., and his first wife Hannah Pancake. After Hannah Pancake died, EM Armstrong married again to Louisa T. White and sired a second family. My husband, Thomas A. Greene, is descended from the the oldest son of this second marriage, Baker White Armstrong. I have in my possession a handwritten copy of the obituary of Isaac P. Armstrong. It reads, in part, "Among the sad fruits of this horrible war, another excellent christian youth has just been gathered to the grave. Isaac P. Armstrong was born in Hampshire County the 16th day of April 1842. He was the son of Col. Edward M. Armstrong a member of the Virginia Convention and now a refugee, with his large family, from his home at New Creek Station in Hampshire. This young man enlisted in the service of his country and the defense of his desolated county at an early period of the war; was in the battle of Manassass--and in Ewell's division, engaged in the series of hard marches and bravely contested fields, which have shed on that division since placed under Jackson such imperishable glore. On Friday morning, the 27th of June, he received a fatal wound in his knee in the battle of Gaines Mill...." The obituary goes on to describe how he succumbed to that wound some seven weeks later after intense suffering.